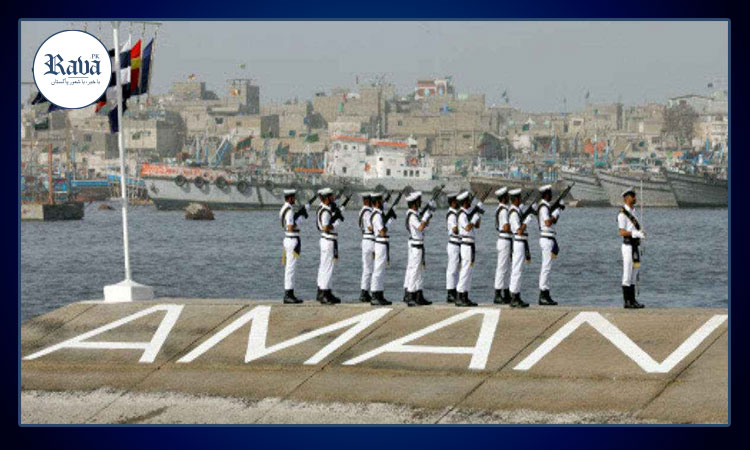 The exercise has been aptly named “AMAN”, which is the Urdu term for “PEACE”. It signifies Pakistan’s endeavor for peace while remaining fully prepared to ensure peace in the region. Pakistan Navy (PN) till to date had conducted six AMAN exercises, a multi-national naval exercise in the North Arabian Sea.

This year’s exercise is the 7th in number, which have been held biennially since 2007. All previous naval exercises of the AMAN series have been highly successful and not only were participated wholeheartedly by navies of friendly countries, ushering goodwill to Pakistan, but have also resulted in all participants including the host PN, gaining tremendous professional experience.

The slogan for the AMAN exercise “Together for Peace” sums up the entire gamut of Pakistan’s aspirations. Not only Pakistan is desirous of maintaining peace but is also keen on including its friends, allies and partners in achieving amity. The world is currently embroiled in trials and tribulations of various types. Besides the war against terrorism, power projection especially in the maritime sphere has increased in the twenty first century. Alfred Thayer Mahan, the famed US naval strategist had rightly predicted that “Whoever controls the Indian Ocean dominates Asia. This ocean is the key to the seven seas in the twenty-first century, the destiny of the world will be decided in these waters.”

Pakistan’s eastern neighbour India is building a Blue Water Navy to fulfil its power projection ambitions. Every nation aspires to build up its defence capability, but India has hegemonic designs and has a history of trying to subdue its neighbours with its maritime capability. Pakistan, Sri Lanka, Maldives and Bangladesh have suffered at the hands of India’s domination syndrome. The US remains oblivious to China’s declarations that it has no hegemonic designs, is keen to resolve issues with its neighbours peacefully and instead concentrate on development and sharing its projects like the Belt and Road Initiative (BRI) with countries of the region and beyond. Interestingly, BRI also has a maritime component, known as the “Maritime Silk Road”. India perceives China as an opponent and is opposed to the BRI as well as its flagship project the China Pakistan Economic Corridor (CPEC), especially the development of the strategic deep-water port of Gwadar. Since the port is located from where 35 percent of the world’s oil supply flows from the Gulf of Hormuz to the west, both the US and India, perceive it as a threat from where China has the capability of choking the world’s
oil supply.

In this milieu, Exercise AMAN-21 comes at an opportune moment. Navies from more than 45 countries are expected to participate in the exercise. The rise in number of participants bears testimony to Pakistan’s rising relevance in the international pitch. The Exercise has focused objectives, which include: projecting a positive image of Pakistan as a country contributing towards regional peace and stability; consolidating PN’s position in the regional maritime arena; enhancing interoperability with regional and extra regional navies thereby acting as a bridge between the regions and displaying of united resolve against maritime terrorism and piracy. The Concept of the exercise has been designed to provide a common forum for: Information sharing, mutual understanding and identifying areas of common interests for group analysis and dialogues through International Maritime Conference; developing and practicing response tactics, techniques and procedures against asymmetric and traditional threats during sea phase of the exercise and Intermingling of multinationals with depiction of their respective cultures during cultural shows/ food galas.

Exercise AMAN-21 envisages hosting numerous events of harbour and sea-phase. The harbour activities include, reception of the participating units, a grand opening ceremony, playing friendly sports matches and a Maritime Counter Terrorism demonstration by the elite PN Marines. The Sea Activities include an International Fleet Review which includes various operational activities/ exercises. Additionally, numerous other sea activities have been planned, which include simple maneuvers), surface practice firing with main armament and search and rescue operations amongst others. Exercise AMAN-21 shall bring honour to Pakistan and will raise the morale of Pakistan Navy for hosting a major multi-nation operational exercise and strengthen the confidence of the nation in the capabilities of the maritime guardians of Pakistan.