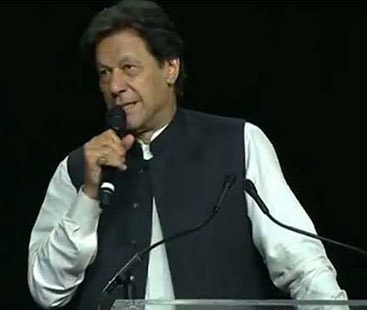 Prime Minister Imran Khan on Monday promised the nation that he would continue to raise his voice at every forum until Indian occupied Kashmir was free.

Speaking at a ceremony to inaugurate the new block of the Ghulam Ishaq Khan Institute, Prime Minister Imran Khan said Quaid-e-Azam had understood the ideology of Hindu extremists, adding that had Pakistan not been formed, we would be facing the same hardships as Muslims in India.

The prime minister stressed that Muslims were second class citizens in the RSS ideology.

Indian occupied Kashmir has been on lockdown since New Delhi revoked Article 370 of the Indian constitution, which conferred special status to the valley.

Last week, Prime Minister Imran Khan warned the international community that the Indian leadership may attempt a false flag operation to divert attention from the massive human rights violations and the unleashing of terror in occupied Kashmir.

“We are hearing India media claims that some terrorists from Afghanistan have entered IOJK [occupied Kashmir] for terrorist activities, while others have entered India’s southern regions,” Prime Minister Imran had tweeted.

He had added that these claims were predictable and being used to divert attention from India’s ethnic cleansing and genocide agenda in occupied Kashmir.