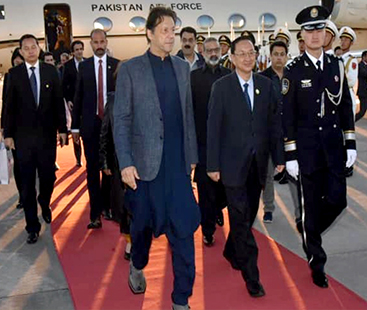 ISLAMABAD: Prime Minister Imran Khan arrived in China in the wee hours of Tuesday on a two-day official visit at the invitation of Premier of the State Council of the Peoples Republic of China Li Keqiang to discuss issues of regional and bilateral significance.

Chinese Culture Minister Luo Shugang received The Prime Minister of Pakistan when he arrived at the Beijing airport. The ambassador of Pakistan to China was also present at the airport to receive PM Imran.

Imran Khan is scheduled to meet the top leadership of the country. He will meet President Xi Jinping and Premier Li Keqiang.

PM Imran Khan on his trip is accompanied by a high-level delegation including the Foreign Minister Shah Mahmood Qureshi, Minister for Railways Sheikh Rasheed Ahmed, Minister for Planning, Development and Reform Khusro Bakhtiyar, Adviser to the Prime Minister on Commerce Abdul Razzaq Dawood, Special Assistant to the Prime Minister on Petroleum Nadeem Babar, Board of Investment (BoI) Chairman Zubair Gilani and senior officials.

Pakistan and China are closest friends, staunch partners and ‘iron brothers’. The two countries are joined together in an “All-Weather Strategic Cooperative Partnership”. This time-tested friendship between the two countries is based on unparalleled mutual trust, understanding and commonality of interests.

The leadership of both countries is fully committed to building closer China-Pakistan Community of Shared Future in the New Era.