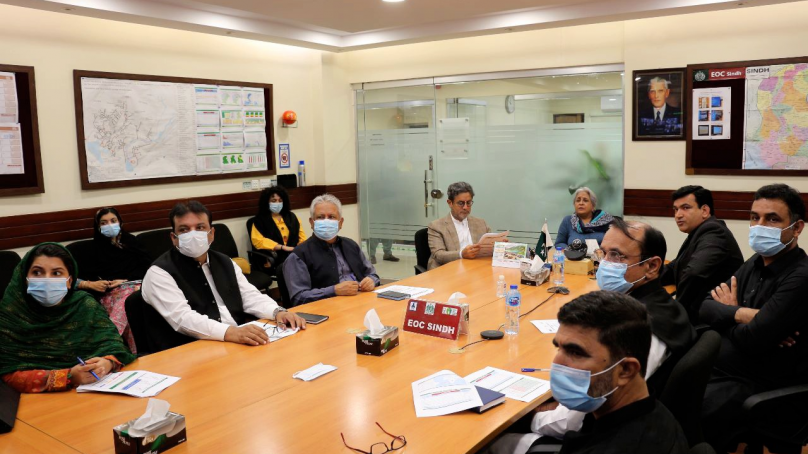 Karachi (25.11.22): Minister for Health and Population Welfare, Sindh, Dr. Azra Fazal Pechuho held a meeting on the readiness for the Sub-National Immunization Days for the anti polio campaign. The campaign will be run from the 28th of November till the 4th of December 2022. The meeting was held at EOC, Karachi, and was attended by Parliamentary Secretary of Health, Mr. Qasim Siraj Soomro, EOC Coordinator, Mr. Fayyaz Abbasi, members of the EPI Sindh and the DCs and DHOs of every province joined the meeting via an online link. In 2022 there have been 20 cases of polio identified in KP and 0 in all other provinces of the country. Provincial Minister for Health, Dr. Azra Pechuho stated that though there have been no cases in Sindh, we have found samples in the environment and this means that there should be no margin for low performance of vaccinators and supervisors. The latest case of Wild Polio identified in Sindh was on the 14th of July, 2020 but the latest case of Wild Polio in the country was identified on the 15th of September, 2022, from KP. The Technical Advisory Group (TAG) has suggested the demarcation of polio cases under a new ‘Risk Categorisation’ that includes endemic interruption, which is what is happening in KP as they have 20 cases of Polio in the year. Outbreak Response which is when environmental samples are being found, Reduction of Risk, when there has been a history of polio cases in a region, and Maintenance which is the procedure whereby all individuals are immunized as part of a regular routine. Dr. Azra Pechuho praised the work being done to combat polio and appreciated the strict protocol being followed by the teams in order to ensure that the number of missed children and refusals is on a constant decrease and the work is being done with due diligence. There are special considerations for the Sub-National Immunization Days that will take place in November 2022:Independent monitoring and data reporting are encouraged so that there is not just one source of the performance and inoculation data available. There will be 0 tolerance for fake finger marking and strict action will be taken against all those who are participating in this, as it endangers the life of the community and country as a whole. Dr. Azra Pechuho said that just one or two drops are not enough for vaccinations, especially for children with low immunity and these inoculations should be followed up so that those children can be given additional dosage. Therefore there will be continued efforts made to identify and vaccinate 0-dose children. Refusal clusters will also be highlighted and more work has to be done in order to break these up and convince the community that vaccinations benefit the society at large as well as the individual. Persistently Missed Children (PMC) will be a priority in the micro plans that have been submitted by all the provincial districts. The populations linked to KP/Afghanistan will be covered diligently and Deputy Commissioners are requested to chair Daily ERM Meetings during the campaign, as well as inaugurate the campaign and engage community notables and political representatives to emphasize the importance of this campaign