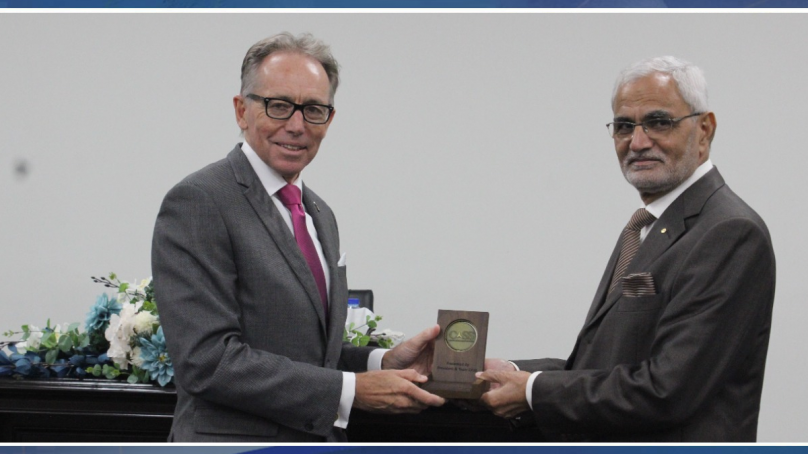 ‘Australia: Role in the Evolving World Order & Relations with Pakistan’

21 September, 2022: “Climate change is a threat multiplier and will erode the traditional lens of security analysis.” These were some of the thoughts shared by H.E. High Commissioner Neils Hawkins at the CASS Ambassador Lecture on ‘Australia: Role in the Evolving World Order & Relations with Pakistan’ organized by the Centre for Aerospace & Security Studies, here in the capital today. High Commissioner Hawkins, a seasoned diplomat, in his frank and interactive discussion highlighted that Australia has strong interests in Pakistan given its size, economic potential, and strategic position in South Asia, and is committed to supporting Pakistan to build economic prosperity, and promote sustainable, equitable development. Appreciating the Government of Pakistan’s immediate efforts to help flood-affected areas and people through the Benazir Income Support Programme as well as the role of the Armed Forces, the High Commissioner shared that given the unprecedented nature of the floods, the Australian government had announced USD 5 million for immediate relief work in the affected areas. He stressed that climate change was a global challenge for which all countries must put politics aside and work together to find practical and sustainable solutions. In this regard, he agreed that climate change was a threat multiplier for Pakistan, and more work needed to be done by institutions like CASS to assess its security implications. He discussed the work of Australian scientists collaborating with Pakistani farmers in Punjab and Sindh to improve farming practices as well as install flood warning systems. ‘We are taking practical steps which is a manifestation of the support and solidarity from Australia with the people of Pakistan,’ he said. H.C. Hawkins also shared that while bilateral trade between Australia and Pakistan was approx. USD 2 billion, its cornerstone and an important part of cooperation was education with more than 13,000 Pakistani students studying in Australia. He shared that Australia was keen to further explore Pakistan’s needs and opportunities to leverage Australian assistance in the water sector as well as technical/scientific exchange opportunities in the agriculture sector and for women’s empowerment. The speaker also focused on geostrategic and geopolitical issues from the impact and role of AUKUS, QUAD, US-China competition, and nuclear nonproliferation, to the need for peace and stability in Afghanistan. Moderated by Ambassador Jalil Abbas Jilani, Advisor to CASS on Foreign Affairs, the talk was followed by a candid Question/Answer session between the High Commissioner and participants who included academia, retired military officers, and diplomats. Delivering his Concluding Remarks and Vote of Thanks, President of CASS Air Marshal Farhat Hussain Khan (Retd) thanked the guest speaker and highlighted that Australia’s significance was increasing in the evolving world order, and said that Pakistan was looking forward to strengthening its ties with Australia and working together for world peace and stability.