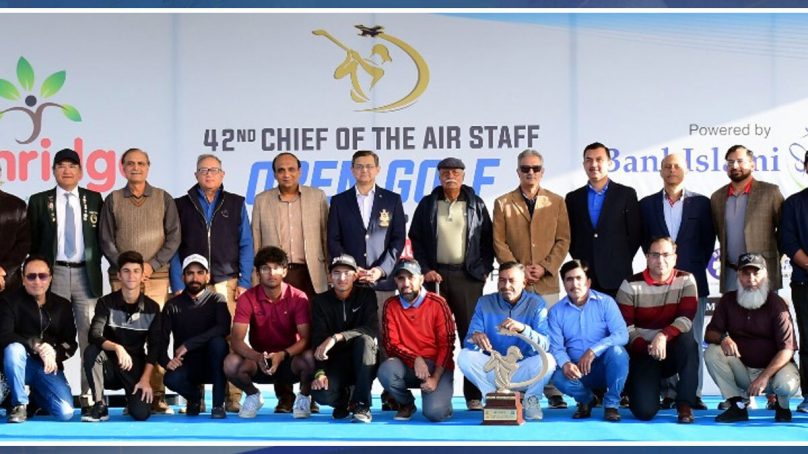 15 January 2023: The Closing Ceremony of the 42nd CAS Open Golf Championship was held at Airmen Golf Club & Recreational Park, Korangi Creek, Karachi. Air Marshal Hamid Rashid Randhawa, Deputy Chief of the Air Staff (Administration), PAF was the Chief Guest at the occasion. Ace Golfer Muhammad Shabbir won the title on the final day of the 42nd CAS Open Golf Championship with a gross score of 278 (10 Under par). 2nd position was clinched by Muhammad Alam with 285 (3 under par) while the third position was achieved by Hamza Taimur Amin & Muhammad Zubair with a gross score of 288 (0 under par). Speaking at the occasion, the Chief Guest congratulated the winners and appreciated the management committee & officials of Airmen Golf Course for making the event a huge success. He further said that Pakistan Air Force would continue to promote golf along with other sports. The Championship which featured over 300 golfers was played over 18 holes for five days at one of the most challenging golf courses in the country. Chief of the Air Staff Open Golf Championship was introduced in 1977 and ever since has been a regular feature in PGF and PAF annual sports calendars.