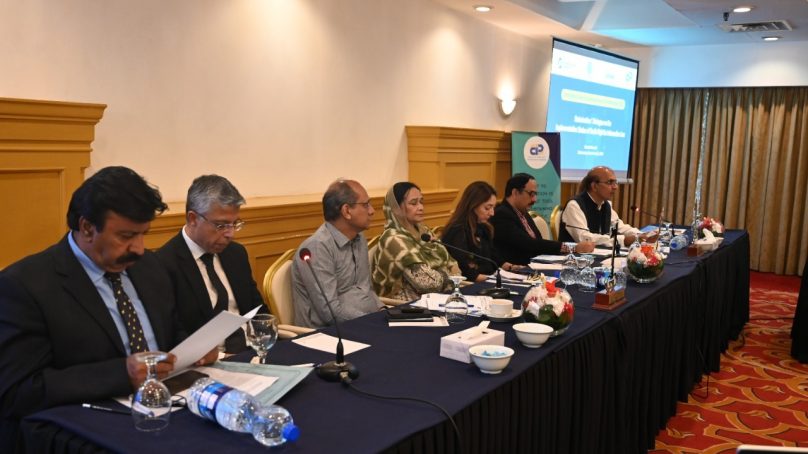 Karachi, September 28, 2022: The Coalition on Right to Information (CRTI) on Wednesday observes International Day for Universal Access to Information IDUAI 2022 by awarding Right to Information (RTI) awards to a Journalist, a Citizen, and Public Information Officer (PIO) on the national level. RTI Awards are given to Saddia Mazhar in the Journalist category and Nadeem Umer in the citizen category for persistently using Right to Information laws and filing investigative stories in print and electronic media. Civil Aviation Authority also wins the RTI award in the department category for devotedly serving the cause of bringing transparency and implementation of the Right to Information Act with letter and spirit. The event was organized by the Centre for Peace and Development Initiatives (CPDI) in collaboration with the Sindh Information Commission (SIC) with the support of Friedrich Noumann Foundations Pakistan (FNF). Since 2014, The CRTI has been successfully conducting Annual RTI Champions Award to protect and promote citizens’ Right to Information held by public bodies. The RTI Award ceremony coinciding with the 20th International right to know the day was held on Wednesday at a local hotel.
Mukhtar Ahmad, Executive Director, CPDI, explained the importance of information and said that the essence of RTI revolves around online/offline proactive disclosure of information by government departments. He appreciated that RTI laws have been enacted in 4 provinces and federal levels whereas implementation remains a question, especially in Sindh and Balochistan. He encouraged citizens to use their fundamental right to know to promote transparency, accountability, and inclusiveness of citizens.
Shahid Jatoi, Information Commissioner, Sindh Information Commission (SIC), while talking in the ceremony, said the Commission is trying to implement the Sindh Transparency and Right to Information Act, 2016 by designation of officials and proactive disclosure of information. Jatoi was also of the said that under the Act every provincial department should proactively disclose information about their actions, decisions, and other affairs through their websites. A practice, which he believes has remained largely absent in most public offices. Saima Agha, Information Commissioner, Sindh Information Commission said that the despite the challenges commission issuing notices, and right now the commission has 272 pending complaints with Commission.
Dr. Raza Gardezi explained the importance of RTI in citizens’ daily life and its contribution to good governance.
Jami Chandio, an activist, said that the Sindh government is ahead of all other provincial governments in making it human-friendly, but the implementation remained weak.
Shahab Sarki, President, Sindh Bar Association said rules should be notified as without notification there is no legal existence.
The Sindh government immediately implement Sindh RTI Act, 2016 said, MQMP MPA Ms. Rana Ansar.  Information can empower citizens so that they can make informed decisions, she further added.
Sharmila Faruqui, PPPP MPA, expressed that we need to empower the Sindh Information Commission for effective use of the right to information to activate the mechanism for transparency and accountability in Sindh. She also emphasized adopting e-governance for proactive disclosure of information through the websites.
Saeed Ghani, Minister of Labour & Human Resources said every department should be accountable including judiciary and law enforcement agencies. Sindh government is committed to empowering the Sindh Information Commission, he further added.
Brigit Lamm, head of Friedrich Naumann Foundation Pakistan congratulated RTI award winners and said in a digital world certified information is crucial, especially in flood crises.
During the question-answer session, the participants were enlightened in detail regarding the implementation of RTI laws in Pakistan. In the end, all the participants pledged to continue their joint efforts for the promotion of a transparent and accountable regime in Pakistan. Seniors media persons, Lawyers, and Civil Society Activists attended the ceremony. CRTI is a platform of 53 civil society organizations working for the Right to Information in Pakistan.