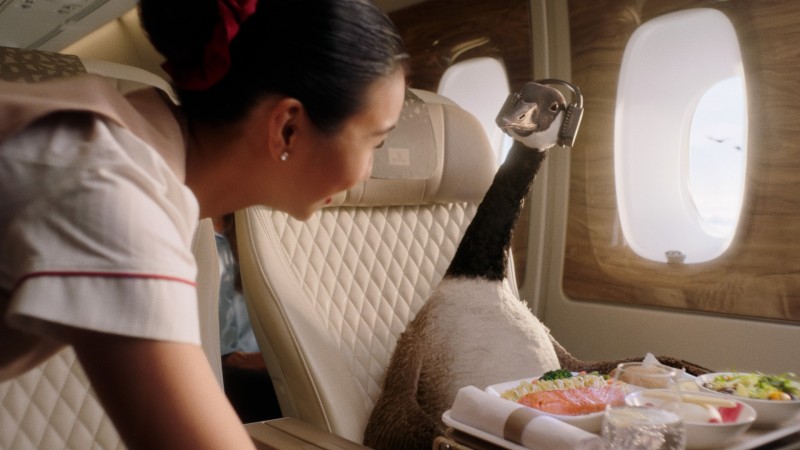 Karachi, September 15, 2022: Following in the footsteps of iconic film and TV personalities Jennifer Aniston, Chris Hemsworth, and Jeremy Clarkson, Emirates’ latest brand ambassador Gerry the Goose is inviting customers to take a gander at the benefits and services of the world’s largest international airline, and choose to ‘Fly Better’.

From September, the global ad campaign will be in full flight across the USA and Europe, reminding customers that Emirates provides an ‘impeckable’ travel experience onboard with award-winning in-flight entertainment, world-class cabin crew, regionally inspired cuisine, and acclaimed beverages. To complement the ‘best-in sky’ offering, Emirates also offers an impressive on-ground experience– through a myriad of online and home check-in options, chauffeur-driven airport transfers, and outstanding lounges.

The campaign storyline follows Gerry as he ruffles feathers by deciding to Fly Better aboard a comfortable and sophisticated Emirates Premium Economy cabin, while his migrating bird-brethren are in ‘fowl humor’ after a long and tiring flight by the wing. Gerry is spotted smugly bypassing his counterparts as they fly outside the plane window, while he indulges in a delicious meal and reclines in his spacious seat to enjoy the ‘The Goose, The Bad and The Ugly’ movie on his 13.3” personal entertainment screen.

‘In terms of the qualities and profile we look for in our brand ambassadors – we are spreading our wings,’ said SVP of Marketing & Brand at Emirates, Richard Billington. ‘Gerry is a savvy traveler who knows what he wants and where he wants to go- but he’s adamant he’ll do it in style, with luxury and comfort as a priority. Having witnessed his seamless travel experience, we are confident that next time his friends will choose to Fly Better.’

Gerry’s career began in Emirates Headquarters in Dubai, where the concept of his journey was ideated and began to take flight. Then onto Untold Studios in London, where initial 3D models of geese were brought to life via Computer-Generated Imagery (GCI). The CGI and filming process took 14 weeks and involved a talented team finessing every feather along with lighting and texture while ensuring carefully created movements brought the character to life. This included time to animate Gerry’s friends, a shoot in London to capture the nature scenes, and a shoot on board Emirates’ aircraft in Dubai.

Relatively new to the acting scene, Gerry cites his career highlight so far as being featured in the Emirates TV ad campaign. The ad will run in 25 countries for one month, starting with the USA on the 30th of August, followed by Europe.

Throughout filming, Gerry collaborated with British voiceover talent Michael Cronin to capture the dulcet tones of an experienced nature documentarist.

Gerry’s species heritage is the Canada goose (Branta canadensis), large wild geese with black heads and necks, white cheeks, white under the chin, and a brown body. They are native to the arctic and temperate regions of North America and found during migration across the Atlantic in northern Europe.

Gerry the Goose admires the acting work of Ryan Gosling, who he says ‘gives him goose bumps’.