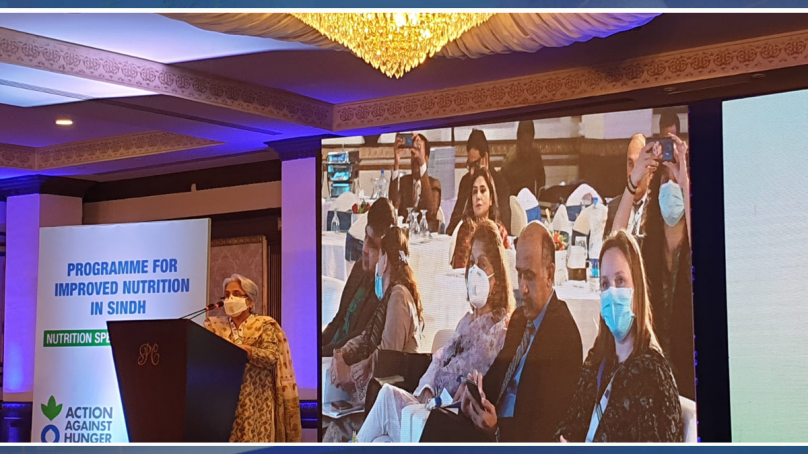 Karachi (7.12.22): Sindh Minister for Health and Population Welfare, Dr Azra Fazal Pechuho, attended the conference that overviewed the European Union’s Programme for Improved Nutrition in Sindh (PINS), as the guest of honour. The conference was also attended by the Country Director, Ms Jennifer Ankrom Khan, Head of Cooperation, and Mr Ovidiu Mic, Provincial Head, Sindh, from Action Against Hunger. The conference was informed of the progress made by the programme’s launch, in 2018. Their aim has been to reduce malnutrition in the province from 48% to 40% for 10 districts of Sindh by 2021. The programme is a 60 million euro and 4-year (2018 till 2022) project by the European Union in partnership with the Sindh Government. PINS has so far established 262 Outpatient Therapeutic Programme (OTP) sites, Outreach Programme and 8 Nutrition Stabilization Centers (NSC) to cater to pregnant and lactating mothers and children under 5 years of age. The 8 districts being served by PINS are Matiari, Tando Muhammad Khan, Tando Allayar, Thatta, Sujawal, Larkana, Shikarpur, Qambar, and Shahdadkot. There has been a 92% achievement rate for curing malnutrition in individual cases, and there have been 188,827 admissions in the OTP sites, which is 154% of the target. 117,006 children have so far been dewormed and 9063 children with severe acute malnutrition were admitted and treated at the NSC. There are currently 2742 Community Health Workers in catchment areas, where 974,290 children aged 6 – 59 months have been screened for malnutrition,  and 263,109 children aged 6 – 23 months have been provided with the MNP supplementation. 513,275 pregnant and lactating women have been screened and 408,672 girls and women aged 15-49 years have been provided with the IFA Supplementation. Minister of Health and Population Welfare, Sindh, Dr Azra Fazal Pechuho was invited to speak at the event. She praised the efforts of the European Union, Action Against Hunger and the Government of Sindh for ensuring provisions for lactating and pregnant women and children under 5. She said that this will have a ripple effect of bringing down health and economic deprivations and better nutrition and child development across the province. Dr Azra Fazal Pechuho added that we, the Sindh Health Department, fully endorse the efforts and resources put into the capacity building of our healthcare workers and the operations of the OTP, NSC, and community-based preventive intervention to improve the nutrition status of girls and women as well as children under 5 in the 8 districts. Dr Pechuho said that Sindh has an overwhelming burden of malnutrition, stunting and high levels of food insecurity which together with the floods has resulted in adversity for millions across the province. Water and Vector-Borne diseases have escalated this situation and we at the government level have established a comprehensive response and are committed to providing the necessary services and support required to counter pre and post-flood challenges. There are 5 objectives of the programme, one is to determine the prevalence of malnutrition (stunting, wasting, underweight and overweight) among children aged 6 to 59 months. The second objective is to determine the nutritional status of girls and women aged 15 to 49 years. The third is to assess the general morbidity (diarrhoea, acute respiratory infection, fever) among children aged 5 years or under. The fourth objective is to determine the Vitamin- A supplementation, measles vaccination, and deworming coverage of children who are 5 and under. The last objective is to assess the distribution rates of iron folic acid among girls and women aged 15 to 49 years.