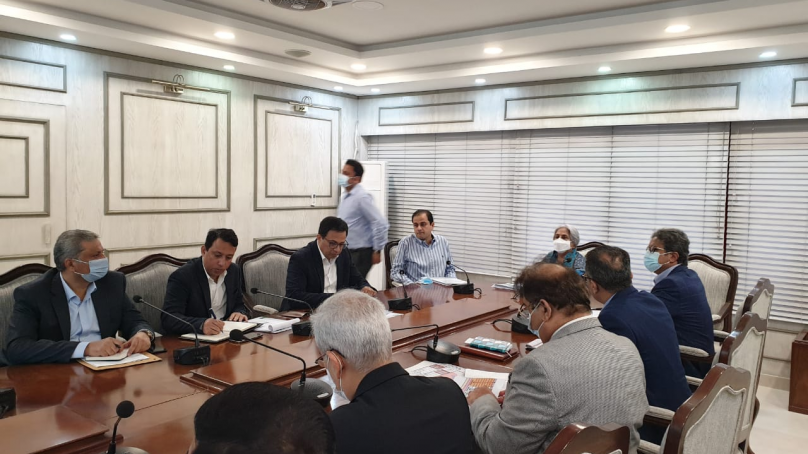 Karachi (04-10-22): Minister for Health and Population Welfare, Sindh, Dr. Azra Fazal Pechuho held a meeting on Vector Borne Diseases. Mr. Najam. Shah, Mr. Nasir Hussain Shah, Mr. Murtaza Wahab, Mr. Qasim Siraj Soomro, and Mr. Zulfiqar Shah were in attendance along with other representatives from the Ministry for Information, Local Government, Karachi Administration, Vector Borne Diseases Department, etc. The meeting was informed that the local governments with the help of DHOs can create a more accurate mapping of vector hotspots. Though dengue is concentrated mostly in Karachi, malaria has been a concern across the province. Though there has been a decline in the trends for dengue infections, it is not conclusive whether this will maintain as both October and November are seen as dengue season in Karachi. Malaria is possibly being underreported still as the data is being sourced from health facilities and many may be treating their symptoms at home without ever being screened. It was also noted in the meeting that even now, not all private labs are delivering the data for dengue and malaria, however over 80% of the health facilities, both public and private are sending regular reports on vector-borne diseases. Beds have been allocated for dengue across the province with Karachi South having 424 beds, 266 in Karachi East, 248 in Karachi Central, 21 in Karachi West, 117 in Korangi, 99 in Kemari, 12 in Malir, 28 in Hyderabad, 6 in Matiari, 24 in Jamshoro, 6 in Tando Allhayar, 16 in Badin, 3 in Dadu, 12 in TMK, 24 in Thatta, 8 in Sujawal, 26 in Mirpurkhas, 18 in Tharparkar, 10 in Umerkot, 20 in Larkana, 19 in Kamber, 12 in Kashmore, 14 in Shikarpur, 10 in Jacobabad, 48 in Sukkur, 16 in Khairpur, 15 in Ghotki, 20 in Shaheed Benazirabad, 6 in Naushero Feroz, and 32 in Sanghar. There are surveillance activities being held that are detecting which houses have been identified as having cases of vector-borne diseases these houses and the surrounding areas are monitored and teams are deployed to fumigate, administer larvicide, and spray indoor rooms for vector control. Through the Entomological monitoring, it was seen that from January to March 2022 in Karachi East, West and Korangi there were 35 surveys done with 210 breeding sites inspected where 29 were positive for vector larvae. 833 dips were taken and 466 larval samples were collected for a total of 0.56 larval density. From April to June 2022 in Karachi South, Malir and Kemari there were 29 surveys done with 201 breeding sites inspected and 14 were positive. 1114 dips were taken, and 540 larval samples were collected for a total of 0.48 larval density. From July to September 2022 in Karachi East, Central, and Malir, there were 60 surveys done, and 588 breeding sites were inspected where 46 were positive. 3526 dips were taken and 3741 larvae samples were collected, for a total larval density of 1.06. Minister for Health, Dr. Azra Fazal Pechuho said that there must be more entomological surveys done in the city so vector density can be accurately measured. A Vector Borne Diseases control room should be established and covid resources should be diverted to vector control, she added. The local government, Information Ministry, and Karachi Administration will increase the public and social awareness messaging regarding dengue and malaria. Awareness material can even be printed on gas and electric bills so that there is increased outreach for public awareness. Dr. Azra Fazal Pechuho also said that there have been naegleria samples found in the water so there must be increased surveillance of water sources and messaging regarding the proper chlorination of the water so that there are no incidents of anyone being infected with naegleria. Industry Ministry must be contacted so that they are properly treating their wastewater and site management should be conducted with care for vector control as well as these areas can be infested with mosquito larvae.