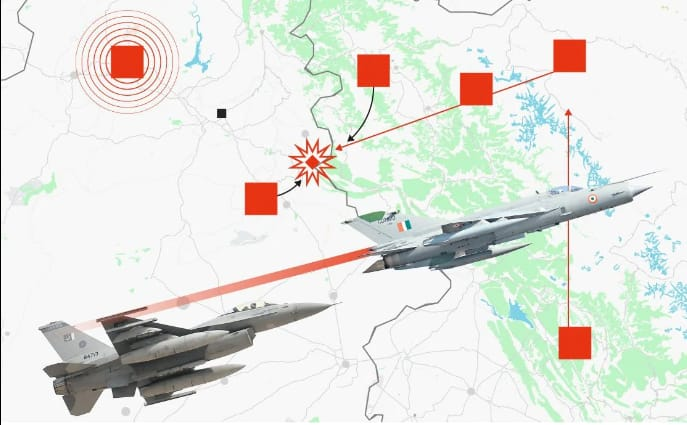 “It’s A Suicide Mission, Sir!” Indian Air Force Squadron Disbanded Due to Refusal By Pilots To Get Airborne

This article is based on a leaked classified document on the investigation of the No. 51 Squadron of the Indian Air Force & its performance against Pakistan Air Force on 27th February 2019 during Operation Swift Retort.

Pakistan Strategic Forum has been able to gain access to documents from inside the Indian Defense Ministry, which we verified as being authentic after an extensive digital forensic study and from corroborations from three different Indian military officials. The documents paint a damning story about the No. 51 Squadron’s performance and its pilot’s unwillingness to get airborne during the Pakistan Air Force’s Operation Swift Retort.

The documents seen by Pakistan Strategic Forum, which we have shared with Pakistani authorities and also sent to two media houses in India, are concerned with a three-month-long internal inquiry called on by the Indian Defense Ministry after fighter pilots assigned to the Srinagar-based No. 51 Squadron were “unwilling and unable to get airborne against the enemy during the PAF’s ingress into Indian territory”. The Indian MoD’s inquiry points to the exact time when the No. 51 squadron was tasked to scramble and fly towards their vectored sector, and the exact time Abhinandan’s sortie was taking-off, noticing a massive time difference of almost 30 minutes between the two events.

The inquiry’s internal documents go on to say that after multiple debriefs and extensive questioning of the squadron’s airmen, ground crew, and pilots, the board of inquiry “has established beyond reasonable doubt that the officers and pilots of the Srinagar AFS showed a complete lack of willingness to follow the given orders and this led to an imbalance in force ratio to Indian disadvantage at a decisive juncture in the events of that day and led to the shooting down of Abhinandan’s jet”. Of course, the IAF officers conducting the inquiry forgot to mention how it was the superior strategy and tactics of Pakistani offensive counter-air units in the sky that led to that particular shootdown.

At least 7 different ground crew were able to state on record that the majority of pilots were already showing fear and unwillingness to be sent into the air after Indian Air Force were all alerted around 9:20 AM on the 27th of February 2019. One senior pilot in the squadron said that he hoped the IAF Western Command “would not be stupid enough” to send their R-77 armed MiG-21s to go fight the PAF’s F-16s and JF-17s calling it a “suicide mission”, and would rather send the better-equipped Mirage 2000s and Su-30MKIs.

This led to the pilots, gathered together in a briefing room at Srinagar Air Base, looking at each other uneasily and agreeing silently that this is the right decision. The pilots later debated on whether they should communicate to their superiors at the base about their feelings on the situation, portraying the recommendations as for the safety of pilots and the aircraft.

To their dismay, the orders came much earlier than they had expected and they were left facing the uneasy prospect of going into the air against a superior adversary with almost no support from the other, more capable fighters in the IAF’s inventory.

The internal inquiry states that the IAF pilots were unwilling to take off primarily because they felt that they had inferior platforms, as well as lapses in planning. What the inquiry fails to say is that at that time, Indian Su-30MKIs in the area had already been heavily beaten back by Paksitani F-16s firing their AIM-120 missiles, hitting and shooting down one of them at around 9:32 AM. Similarly, two IAF Mirage 2000s in the area reported heavy interference in comms and jamming of their radars by the Pakistani JF-17A Thunder jets they were facing and were requesting to return to base (RTB) fearing that if they got closer to the border the JF-17s might shoot them down.

The No. 51’s pilots knew this, and thus that became one of the main reasons that pilots were unwilling to go into their fighters and scramble to take off. The inquiry report even states that one of the pilots gave the excuse of a “stomach bug” and spent 40 minutes in the washrooms as the debate on whether to fly or not was ongoing between the pilots. Eventually, after several heated orders coming from the base commander to get airborne, who himself was being lambasted by the commander of IAF Western Command, six pilots mustered up the courage to get into their jets and taxi to the runway.

The inquiry states that of these six, only five took off while one MiG-21 reported a technical issue with his engine thrust, rather conveniently appearing during the taxiing to the runway, and refused to take off, citing ‘safety issues’. Of the five that did take off, only two (one of which was Abhinandan) proceeded to fly to the sector they had been vectored to by their ground controllers, while one of their colleagues remained flying further inside Indian airspace, and the other two flew CAPs over Srinagar AFS, all three technically disobeying direct orders to fly to the LOC and take on the PAF. Later, Abhinandan and his wingman were also heavily jammed as they came near the border, and due to this, they could not access radar information or subsequent IAF ground controller’s orders to turn back because they could see only two Indian fighters were heading towards a heavy concentration of PAF fighter sweeps.

According to a former and currently serving Indian air force official that spoke to PSF under the condition of anonymity considering the sensitivity of the issue, said that in the next two minutes, things happened in rapid succession as Abhinandan’s wingman abandoned or left him and turned back, unknown to Abhinandan who thought he was being followed by his wingman and going to confront a single Pakistani Mirage III fighter-bomber.

All of his comms being jammed and with no air-intercept radar opportunities being available, he was unaware that he had, quite literally, no support assets at his disposal and he was being watched by Pakistani airborne early warning aircraft, being jammed by the PAF’s electronic warfare aircraft and was walking into a hornet’s nest. He was confronted by an F-16 fighter and his wingman, who shot a single AIM-120C missile at the MiG-21 Bison, whose old and malfunctioning radar warning receiver only began beeping when the missile was in the air and coming towards him, flowing hot over Mach 2. He had no time to react and ejected as his plane was hit and shot down in a ball of flame. The rest, as they say, is history.

According to data available with Pakistan Strategic Forum, the Pakistani airstrikes began that day at around 9:25 AM local time, and Indian air defenses vectored the No. 51 squadron’s MiG-21s at the same time. The three MiG-21s took off from Srinagar AFS at 9:47 AM, raising serious questions on the lapses in training and chain-of-command at IAF, which ultimately led to this inquiry and its findings.

The inquiry also stated that the board recommends grounding 13 pilots and disbanding the squadron from IAF service. Later, under the excuse of a routine phase-out of the MiG-21 from the Indian Air Force, the squadron was disbanded from the Indian Air Force and will not be re-equipped with new fighters. This serious lapse also led to the commander of Indian Western Air Command being removed from his post, according to a serving Indian Air Force official that spoke to PSF on the topic during our investigation.

It seems the planned phase-out of the MiG-21 happened at just the right time and acted as a blessing-in-disguise for the already embarrassed Indian Air Force, saving face from an abysmal performance in the 2019 skirmishes with Pakistan. The No. 51 squadron was disbanded on the 30th of September 2022, and the grounded pilots are now being assigned menial posts in such branches as logistics and accounting in faraway Indian air stations.

Counterpoint Whitepaper: TECNO plays a leading role in the premium evolution of the 5G Smartphone industry in Global Emerging Markets