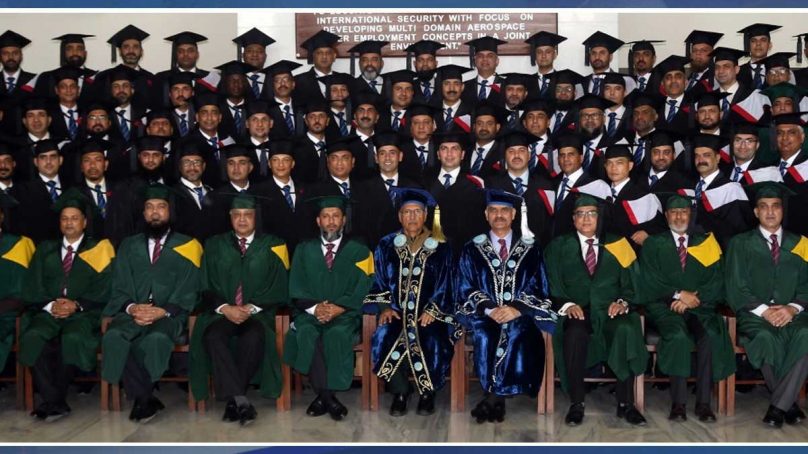 29 June 2022: The Convocation & Graduation Ceremony of No 35 Air War Course was held at Air War College Institute, Karachi today. Dr. Arif Alvi, President of the Islamic Republic of Pakistan, was the Chief Guest at the occasion.

Addressing the graduating officers, the Chief Guest congratulated the participants on the successful completion of their course and achieving a great milestone in their careers. He said that the requirements for the acquisition of knowledge are changing rapidly in the present era, so the acquisition of technology is the only way to gain modern education. He further added that in this Hyper-competitive world, research and work on artificial intelligence are of vital importance. He further said “We must continue to support the oppressed, regardless of their race or color,” and condemned the biases shown by India against the Indian Muslims along with the human rights situation in IIOJK. He added that in modern warfare whether conventional or unconventional, no service could achieve success single-handedly and joint strategic planning is required.  Later on, the Chief Guest awarded certificates to the graduating officers. The top graduate trophy was awarded to Commander Waleed Arif from Pakistan Navy.

PAF Air War College Institute is a premier institution of the Pakistan Air Force, where senior and mid-level officers of Pakistan Armed Forces and friendly countries are prepared in domains of Air Power doctrine, strategy, and employment for higher Command and Staff appointments. The officers from tri-services of Pakistan, along with the officers from allied countries including Bangladesh, Sri Lanka, Indonesia, Malaysia, Jordan, Yemen, Saudi Arabia, Egypt, Nigeria, and Iraq were among the graduates. The Ceremony was also attended by various high-ranking Civil & Military Officers and diplomats from allied countries.