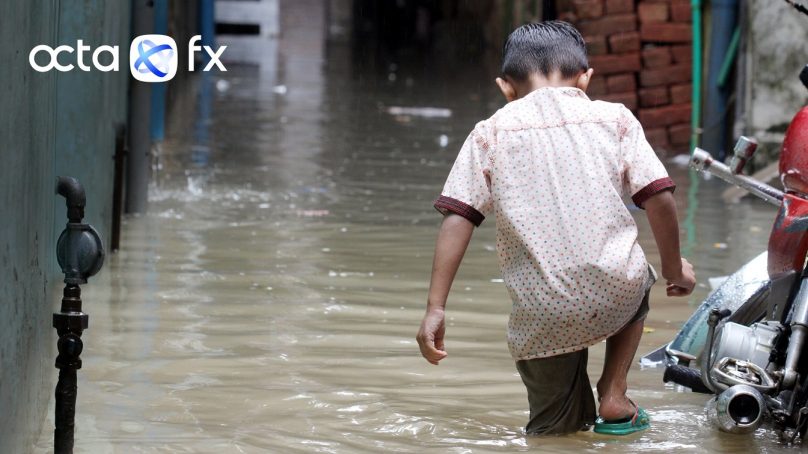 The global broker OctaFX joined efforts with Association for Women’s Awareness and Rural Development to provide emergency aid to 250 families of the flood-hit Taunsa, Dera Ghazi Khan District, Pakistan, between 15 August and 14 September 2022.

The unprecedented flooding has already cost the lives of more than 1100 people, affecting at least 33 million—one-seventh of the country’s population—according to UN estimates. With more than 700,000 heads of livestock swept away and 3.6 million acres of crops wiped out, Pakistan is already facing food shortages and soaring prices.

In the Tehsil Taunsa of the Dera Ghazi Khan District in Punjab, eight mauzas (villages) were badly hit by the disaster. The flood destroyed up to 8000 houses, submerging the area under 5–6 feet of water. The locals and the government are evacuating people from the district and providing them shelter in the nearby schools and government camps.

To combat the devastating effects of the ongoing flooding, AWARD prepared an emergency aid plan for distributing food packages to 250 families from the eight affected villages. The packages include essential food items such as rice, flour, tea, biscuits, sugar, cooking oil, grains, and clean drinking water.

‘When we heard about the disaster, we instantly tried finding ways to help those who suffered from the flooding in Pakistan. Our long-standing partner AWARD proposed an emergency plan to provide aid to those who lost their homes and livelihoods. Immediately we started cooperation, hoping to alleviate the dire situation 250 families—approximately 1500 people—found themselves in,’ the OctaFX press office commented.

OctaFX is a global broker providing online trading services worldwide since 2011. The company is involved in a comprehensive network of charity and humanitarian initiatives, including the improvement of educational infrastructure and short-notice relief projects supporting local communities and small to medium enterprises.

Association for Women’s Awareness and Rural Development (AWARD) is a non-governmental, non-profit, and non-political organization based in Faisalabad in the province of Punjab, Pakistan.

During the 2010 floods, AWARD distributed food and non-food items to 10,051 people in the Faisalabad district, Muzzafargarh (Punjab), and Mansehra (KPK). Five years later, in 2015, the association distributed food packages to 500 families in the Muzaffargarh district in Punjab.

Zeb Bangash’s an Ode SaafHawa (Clean Air) is out now