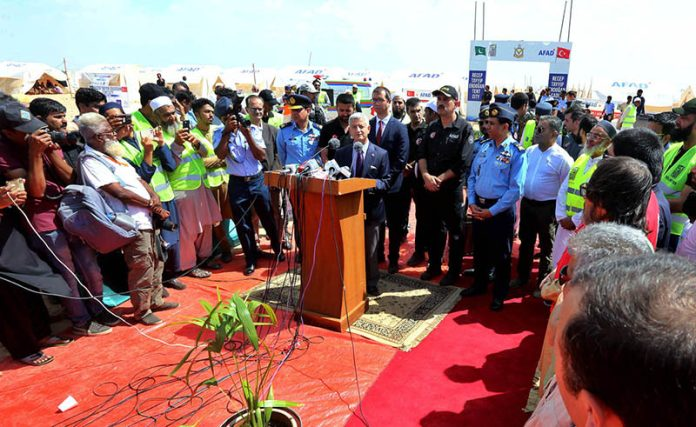 AMSHORO- The Recep Tayyip Erdogan tent city has been established at Pakistan Air Force (PAF) Bholari airbase in Jamshoro on Sunday. Pertinent to note that PAF Base Bholari is near the town of Bholari, located in Jamshoro District in Sindh Province, northeast of Karachi.
A Turkish official at the setup ceremony of the tent city said the Turkish people’s hearts are with the flood victims of Pakistan and Turkey has set up three bridges also along with the aid supplies.
Turkish Embassy in Islamabad in a tweet said that the 13th goodness train is on the way to Pakistan with 544 tons of humanitarian aid material.
Turkey has sent 30812 family-sized tents, 440663 food and hygiene boxes, and 2235168 medical aid stuff so far to Pakistan.
Meanwhile, Turkey’s state-run organization AFAD on Sunday inaugurated Tent City for flood victims of Sindh near Nooriabad.
The Tent City has been established in collaboration with the Pakistan Air Force and the Bait-ul-Salam organization based in Karachi. More than 200 tents have been erected in the city for flood affectees. Speaking on the occasion, Turkish Consul General to Karachi Cemal Sangu said that Turkey is deeply grieved over the loss of lives and properties in Pakistan, and in this troubled time, we stand by Pakistan. So far, 14 cargo planes with 212 tons of relief goods, and 13 trains of aid items have been provided to Pakistan, adding that more aid would come by tomorrow in a plane while more trains with relief goods would also come soon.
PAF’s Air Vice Marshall Zaeem Afzal thanked the Turkish government for providing humanitarian assistance to Pakistan. He said Turkey had provided sufficient support to Pakistan. Zaeem said that 130 families had been settled in the Tent City and that number would be raised to 500 families. According to AFAD details, humanitarian aid items consisting of 50,000 tents, 500,000 food packages, and cleaning/hygiene materials are planned to be dispatched to the region under the coordination of the AFAD Presidency.
In order to dispatch humanitarian aid items to the region, “Goodness Train Expeditions” were established in cooperation with the Ministry of Transport.
and Infrastructure, and an “Air Bridge” was also established in cooperation with the Ministry of National Defence. The 250,000 of 500,000 parcels consisting of food and cleaning/hygiene materials are prepared by 81 Provincial Governorships and Municipalities while the remaining part is prepared with the contributions of Turkish Non-Governmental Organizations.
As of 2 Oct 2022, humanitarian aid items have been provided to the region, including 14 planes (212 tons), 13 Goodness Trains (334 wagons, 7,290 tons), and procurement from the Pakistan local market.
The dispatching of the 15th plane which is going to carry malaria pills, tetanus vaccine, and other medical supplies to the region has been planned.
The first humanitarian aid plane from Turkey reached Pakistan on 28 August 2022 after the flood disaster.