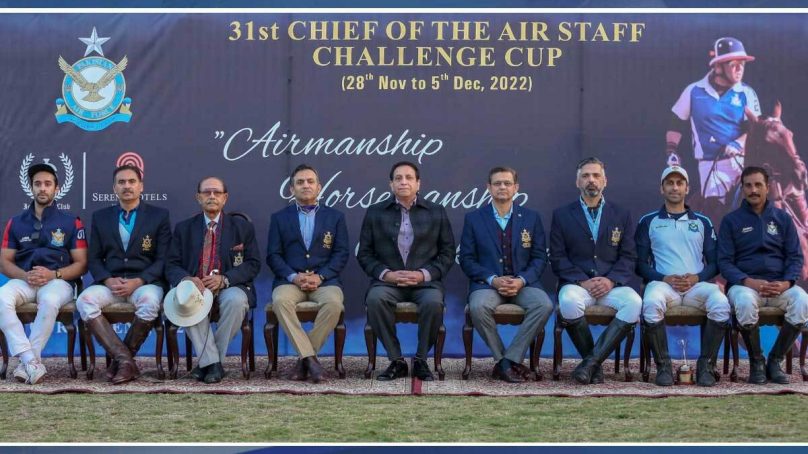 06 December 2022: The exciting final of the 31st Chief of the Air Staff Challenge Cup Polo Tournament was played at the lush green Islamabad Polo Club. PAF White bagged the winners’ trophy by defeating PAF Blue with 5-1/2 to 5 goals. Air Chief Marshal Zaheer Ahmed Baber Sidhu, Chief of the Air Staff, Pakistan Air Force was the Chief Guest on the occasion. The Chief Guest gave away prizes to the players and awarded CAS Challenge Polo Cup Trophy to the winning team.  The Air Chief congratulated the winners and appreciated the club management for the successful conduct of the event. CAS also emphasized the significance of sports for the improvement of psychomotor skills and physical health of the youth.PAF Sports Control Committee in collaboration with Islamabad Polo Club management organized the 31st Chief of the Air Staff Challenge Cup Polo Tournament-2022 which commenced on 28 November 2022. With all the domestic stars of the game in action in the incomparable setting of Islamabad Polo Club’s stunning grounds, situated in the heart of the capital, the tournament draws in polo aficionados from all over Pakistan. 06 polo teams namely PAF Blue, PAF White, Asean, ASC Rizvi, ASC Ahmed Khan, and ASC Vaulters participated in the mega event. Diplomats, high-ranking civil & military officials along with polo enthusiasts witnessed the final match. PAF regularly contributes to nation-building efforts by organizing such tournaments. The event was widely appreciated both at domestic and international levels which is a true manifestation of the PAF’s commitment to promoting sports in the country.