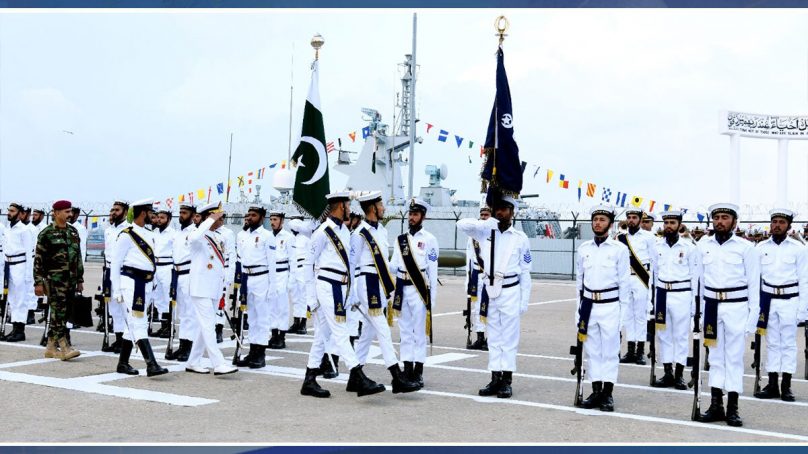 Karachi, 29 Dec 22:    Pakistan Navy Fleet Annual Efficiency Competition Parade held at Karachi to mark the culmination of a rewarding and eventful operational year of Pakistan Navy Fleet units. Chief of the Naval Staff Admiral Muhammad Amjad Khan Niazi graced the occasion as Chief Guest. Upon arrival, the Chief Guest was received by Commander Pakistan Fleet, Vice Admiral Ovais Ahmed Bilgrami, and the Guard of Honour was presented by a smartly turned out contingent of Pakistan Navy.

Speaking on the occasion, the Chief of the Naval Staff expressed complete satisfaction over the operational readiness of the Pakistan Navy Fleet and lauded the dedication and professionalism of officers and men for the successful conduct of a large number of naval exercises including bilateral and multilateral exercises in own and international waters contributing towards regional maritime security and protection of Pakistan maritime interests in the region and beyond. The Admiral commended the PN Fleet’s efforts and contributions in achieving significant operational objectives and milestones and protection of Pakistan’s Sea Lines of Communication. He highlighted the Pakistan Navy’s endeavors to ensure seaward security of the Exclusive Economic Zone (EEZ), Gwadar Port, and maritime-related projects of CPEC. Naval Chief reiterated that Pakistan Navy is fully cognizant of changing geopolitical realities in the region and stands resolute to defend the country’s sea frontiers. The Admiral also underscored that the prevalent global and regional geostrategic environment demands Pakistan Navy remain ever vigilant and battle to safeguard Pakistan’s maritime interests.

Later, the Chief of the Naval Staff gave away Efficiency Award shields to the best-performing units of various Squadrons of the Pakistan Navy Fleet.