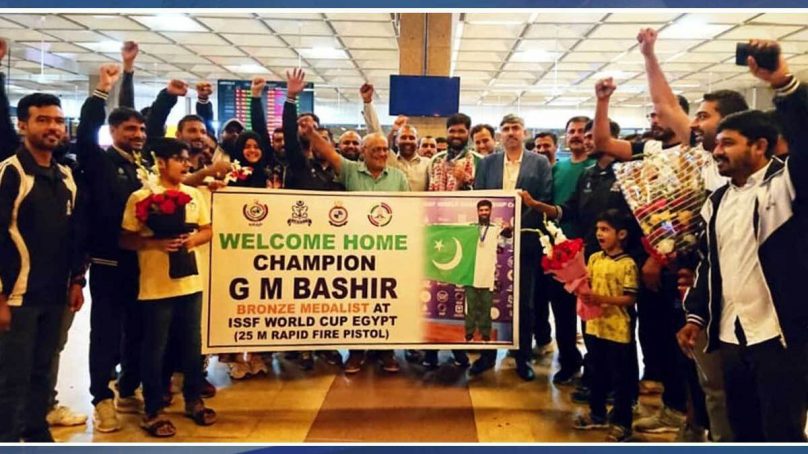 Islamabad, 26 Oct 22:   Pakistan Navy Ghulam Mustafa Bashir MCPO bagged Bronze Medal at the 1st International Sports Shooting Federation (ISSF) Rifle/ Pistol shooting Championship held in Cairo, Egypt. This championship served as a qualification event for Summer Olympics scheduled in Paris, France in 2024. Ghulam Mustafa Bashir and Rasam Gul from Pakistan Navy participated in the 25m Rapid Fire Pistol event and represented National Flag during the said championship. Both shooters performed well and Ghulam Mustafa Bashir secured 3rd position. By securing Bronze Medal, Ghulam Mustafa Bashir not only qualified for participation in Paris Olympics 2024 but has reached to No. 07 in the world ranking. A total of 77 shooters from 37 countries participated in the championship. Upon return to Pakistan, both shooters were warmly received at Jinnah International Airport, Karachi. The medal-winning performance of the PN shooter is a testimony of the Pakistan Navy’s efforts to promote shooting as a sport in Pakistan. Chief of the Naval Staff is the President of the National Rifle Association of Pakistan (NRAP) has applauded efforts put in by Pakistani shooters and expressed hope to bring more laurels for the Nation in the future.