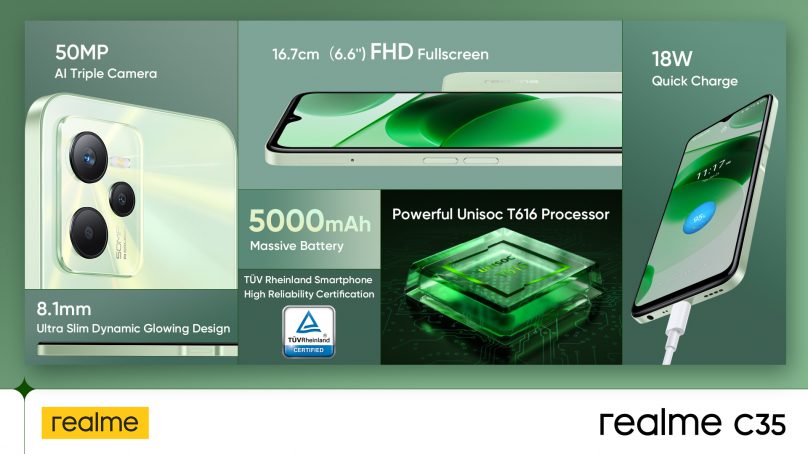 realme has dedicated the first few months of the year 2022 to its offerings in the mid-range and high-end segments, the realme 9i, and realme 9 Pro+ respectively. After the successful impact of these models in Pakistan, realme is gearing up to bring yet another midrange king to dominate the local smartphone industry.

realme C35 has topped sales charts in the European and South Asian markets and is poised to do the same in Pakistan with its Glowing Silk Design, 6.6-inch FHD Display and 50MP AI Triple Camera. The star performer of the C Series – realme C35 is set to take the market by storm with its latest offerings.

realme’s C Series is perfectly packaged for emerging markets like Pakistan due to its large tech-savvy population who has a budget-conscious mindset. The growing youth of the country desires the specifications that a premium smartphone can provide but have to work within a smaller budget. realme’s C series is the answer to this conundrum, balancing quality with reduced costs.

Since its inception realme has had a three-pronged focus of maintaining quality, improving customer satisfaction, and democratizing tech to lower price segments. In order to further this aim, realme even inaugurated its first local assembly plant in the country earlier this year in the city of Lahore. The benefit of this plant was passed on to consumers in terms of reduced prices for realme products and higher reliability in the final product. The realme C35 opened for pre-orders on Wednesday, May 18, 2022, exclusively through Daraz and has piqued the interest of the entry-level segment.

For Phase 1 of the new smartphone’s rollout, realme is expanding coverage to over 1,500 shops across the country. This feat is made possible with help from addition to realme’s roster of distributors thanks to their recent partnership with Advance Telecom, one of the leading mobile distributors and service providers in the country. The realme C35 is expected to overtake the growth of the realme 9i two-fold. This leads one to wonder what exactly makes the realme C35 such an incredible offering. As with the rest of the phones in the C series, the realme C35 comes with an internationally renowned TUV Rheinland Smartphone High-Reliability Certification. This certification is earned after undergoing rigorous testing under internationally recognized standards and is held in high regard. The Glowing Silk Design of the new handset takes inspiration from the simplicity, rich quality, and smoothness of silk. The handset is designed to give you a premium look and feel. The realme C35 also features a powerful 50MP AI Triple Main Camera setup for you to take high-quality images at your disposal as well as a 6.6-inch FHD Display to enjoy those spectacular moments.

realme firmly believes in the “Dare to Leap” philosophy which is why they take chances and aim high. realme’s vision for the next two years is to slide into the group of top three smartphone brands while it aims to snatch the top spot within the next five years. Currently, realme still holds a great position as one of the top five smartphone brands (5G) in the world and was named the fastest growing 5G smartphone brand globally earlier this year. All these acknowledgments were made possible for realme because of their focus on nurturing a customer relationship across longer periods of time as realme is committed to giving its consumers lifetime value. This relationship is tended to with the availability of after-sales service through physical service centers in major cities around the country or through a toll-free helpline to address any customer concerns. The realme C35 is still available for pre-order for just PKR 32,999/- for a few more days on Daraz with a free gift of the realme Buds Classic being included as well so go and grab yours today.