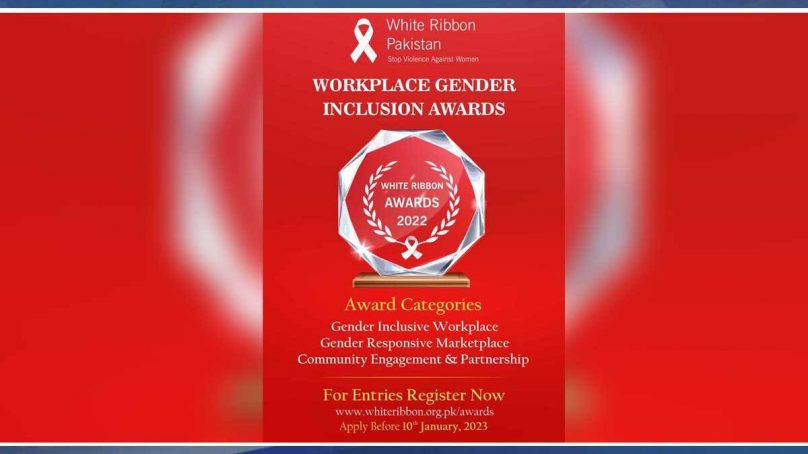 Lahore – 28th November 2022: For the first time in Pakistan, White Ribbon, which is part of the global men’s movement present in over 50 countries for ending violence against women and girls, has announced the launch of White Ribbon Workplace Gender Inclusion Awards for the corporate sector in Pakistan.

Talking to the media Founder and President of White Ribbon Mr. Omer Aftab said that these awards will be presented annually to companies that use their position to advocate for gender equality and take steps to advance women’s empowerment. These awards are being launched on November 25, the White Ribbon Day for the Eradication of Violence against Women.

Mr. Aftab further added that White Ribbon Awards will be presented annually to the companies which advocate for gender equality and take steps to advance women’s empowerment in the workplace. The awards will celebrate and acknowledge the best practices and policies of corporates that take part and highlight gender justice and gender inclusion for their workforce, customers, community and through their CSR and brand communication and advertisements.

All organizations that work on gender equality and have shown a positive impact regarding women’s empowerment at the workplace are eligible to apply for these awards. There are three categories of White Ribbon Awards: Gender Inclusive Workplace, Gender Responsive Marketplace, and Community Engagement and Partnerships. For all categories, survey forms will have to be submitted online. Finalists will be selected based on the independent ranking system.

Violence against women is a shameful reality across the world. Mostly it is committed by men. It is rooted in gender inequalities, and it still far too often goes unnoticed and unchallenged. The White Ribbon Campaign exists to change this.

Men and boys wearing the White Ribbon declare that they will never commit, excuse, or remain silent about men’s violence against women. White Ribbon is one of the world’s largest male-led campaigns to end men’s violence against women. It started in 1991 in Canada and is now active in over 50 countries across the globe. Every year it is growing stronger as more men and boys realize that women’s and girls’ safety is their issue too.

Treatment of Women’s Cancers Prioritized through Roche and Greenstar Collaboration