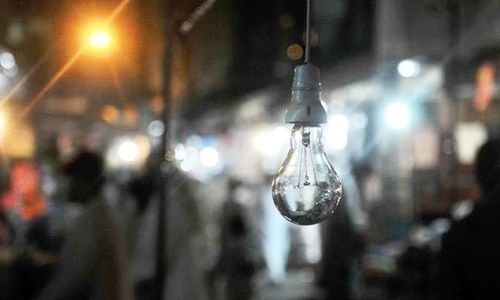 PTI legislators on Sunday urged the federal government to end the “monopoly” of K-Electric (KE) by bringing in another company to supply electricity in an attempt to address the power issues faced by people residing in the metropolitan city.

They also announced that they will be staging daily sit-ins outside the KE ‘s headquarters from Monday.

Addressing a press conference in Karachi, Firdous Shamim Naqvi, Leader of the Opposition in the Sindh Assembly, said the city has long faced electricity issues.

“The citizens of Karachi are demanding cheap electricity,” he said, demanding an equal rate of power in the whole country.

Rejecting the justification of the power utility for prolonged power outages, Naqvi said the KE provided incorrect information and had not ended the load-shedding within 48 hours, despite assuring the Sindh governor otherwise.

“KE’s power [generation] capacity is restricted to 600MW,” he said, adding that the power utility had also failed to maintain its plants.

“Citizens have become fed up with their attitude. The time has come to think about another system for power,” he said, urging the federal government to resolve the city’s power crisis. “Another company should be brought in to distribute power in Karachi.”

Meanwhile, MNA Aftab Siddiqi said that initially KE’s head had promised to end load-shedding on June 28, but when he was reminded of this, he failed to give a satisfactory response.

“The shortage of furnace oil has been resolved and there is no shortage of gas. Each year, citizens suffer such prolonged power outages.

“People are quarantined because of Covid-19, power outages are just adding to their problems,” he said, adding that they wanted a definitive timeline for when load-shedding will come to an end.