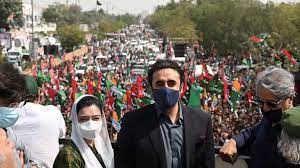 The long marches of the Pakistan Peoples Party (PPP) and Pakistan Tehreek-e-Insaf (PTI) are expected to cross the Moro city at the same time. To avoid a possible clash between the workers of the two parties, Director General (DG) Rangers Sindh Major General Iftikhar Hassan contacted the respective parties’ leaderships to change arrival schedules of Moro city and refrain from a potential confrontation. Thankfully, the leaderships of the PTI and PPP obliged the DG Rangers by changing their marches’ respective timings. PPP’s long march will exit Moro city before the arrival of PTI marchers.

PPP resumed its Awami Long March in Islamabad headed by the PPP chairman Bilawal Bhutto. The march was continued after staying a night in Tando Muhammad Khan. The march began from Quaid’s mausoleum in Karahi to Malir via Badin. Bilawal addressed the rally when the marchers reached Garibabad. On the other hand, PTI’s Haqooq-e-Sindh march is currently in Larkana and will move to Moro, Nawabshah on Wednesday.