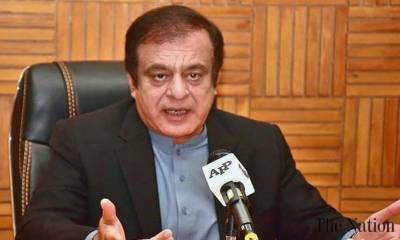 Minister of Information Senator Shibli Faraz blamed the PPP for “destroying” Karachi, the capital of the province of Sindh, alleging that God is exposing the provincial government by sending down rain.

As the extent of damage became visible throughout the day, large areas were submerged in water and mud at Karachi. In some places, floodwaters rose to the small buildings first floor.

“Sindh government is responsible for destroying Karachi. By looking at the situation of urban Sindh, one can guess what will be the plight of people of rural Sindh,” Faraz added.

“The PPP instead of turning Larkana into Karachi has changed Karachi into Larkana. I ask them where they have spent Rs14 trillion during their ten-year rule in the province,” the minister added.

Talking about the repatriation of former prime minister Nawaz Sharif, he dismissed the claim that the PTI government is not serious about getting back London’s convicted PML-N supreme leader.

“The former premier had left the country on the pretext of getting medical treatment. The government will use all means to repatriate him,” he added.

He said the opposition parties are getting united only for protecting plundered national wealth, “otherwise they have different agendas. We face no threat from them.”

The minister said the meeting between PML-N president Shehbaz Sharif and JUI-F leader Fazlur Rehman on Tuesday ended in a fiasco and Bilawal Bhutto Zardari, president of the PPP, and Shehbaz had opposing views on several matters.

“Opposition is trying to instigate people against the PTI government but they will fail in their designs.”