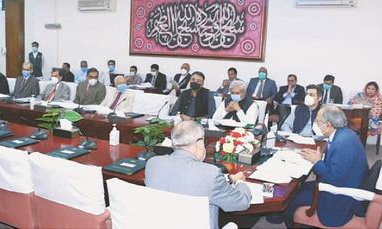 On Wednesday, the cabinet ‘s Economic Coordination Committee (ECC) remained agitated about the wheat situation despite vague indications from the authorities concerned and the gradual rise in the demand for flour prices.

However, an ECC meeting chaired by Dr Hafeez Shaikh, Advisor to the Prime Minister on Finance and Revenue, allowed the recovery of around Rs115 billion through the re-gasified liquefied natural gas (RLNG) tariff in a staggered manner to meet the Sui Northern Gas Pipelines Limited (SNGPL) budget deficit, including past receivables of Rs74 billion.

At the meeting, the Oil and Gas Regulatory Authority (Ogra) was instructed to grant new CNG (compressed natural gas) licences to RLNG-based CNG stations, with the proviso that the licensee will not receive or demand the conversion to indigenous gas. In 2008, a ban was imposed on the issuance of new licenses.

An ECC participant said that the members of the committee voiced serious reservations about the handling of wheat imports, the presentation by officials of the Ministry of National Food Security and Research (MNFSR) of false data on the demand-supply situation and pricing statistics that created anxiety among the masses and earned bad name to the government.

Pakistan Air Force is a true symbol of pride for the nation: Murad Saeed

Sindh retracts its decision of handing over two islands to Centre