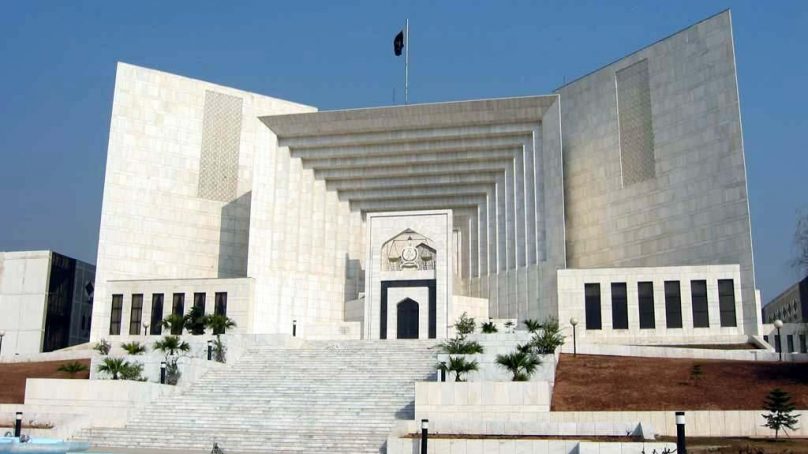 The Supreme Court on Thursday issued a contempt of court notice to Provincial Minister of Sindh for Local Government Saeed Ghani for his comments over the anti-encroachment drive in the metropolis.

During a hearing regarding illegal encroachments in the city in which the attorney general, secretary defence and other officials were present, the court rejected the report presented and said it was ambiguous.

“Why were the court’s orders not followed,” Justice Gulzar remarked. “This report is unsatisfactory and is equivalent to defrauding.”

To this, the attorney general replied that it is the Supreme Court’s orders that he has a chance to explain himself.

“Do they want to wage a war against the court,” the judge asked. “We will listen to everyone first and then decide where we want to send them.

Taking notice of the provincial minister’s speech, the court issued a contempt of court notice to Ghani.

The court then turned to the director-general of the Sindh Building Control Authority (SBCA) and said, “We had given orders to remove illegal settlements from the city, has any action been taken in this regard?”

The court further asked DG SBCA if he wants to go to prison straight from court.

Ordering the DG SBCA to take immediate action against illegal settlements and to remove them from the city, Justice Gulzar remarked that eight-storey high buildings have been constructed in Punjab Colony, Delhi Colony and there is no water or electricity in them. “There are illegal parking places in Zainab Market, along with the rest of Saddar,” the judge observed.

To this DG SCBA told the court that action has been taken against illegal parking in Saddar.

The judge remarked that no action has been taken in Saddar. “I go to Saddar every day and see illegal parking there. When did conduct a drive in Saddar?” Justice Gulzar asked.

The judge further told DG SCBA that he has sold the entire city. “Have you seen the state of Tariq Road? All the garbage has been dumped there. Didn’t any plaza owner construct a parking area there? It takes three hours to get out of the city.”

The judge then ordered that all master plans of the city since 1950 be presented and that the court be informed on whose ordered were the plans change and when. “We want to know when a commercial building was constructed and when was it commercialised and on whose orders,” the judge added.

The Supreme Court Karachi Registry in January had ordered that the city be restored to how it was 40 years ago and directed authorities to demolish unlawful constructions. The court had further said that no house will be demolished and be used for commercial purposes in the city.

Ghani had said that the provincial government cannot comply with the Supreme Court order of demolishing unlawful constructions. The minister had said it was not possible to demolish the residential buildings.

HIV scare in Larkana as 181 children test positive for virus