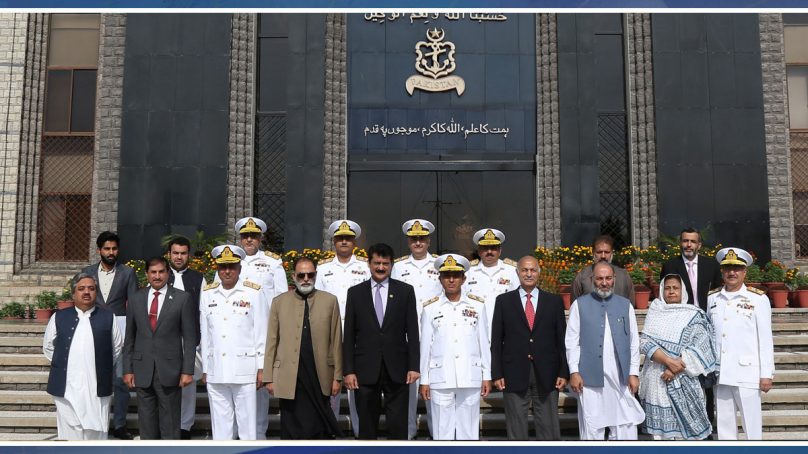 ISLAMABAD, 11 Oct 21:  Members of Senate Standing Committee for Defence, headed by Senator Mushahid Hussain Sayed visited Naval Headquarters for a briefing on the role and objectives of the Pakistan Navy and discussion on maritime security issues.

During the visit, the Standing Committee was briefed on ‘Pakistan Navy — Challenges, Response and PN contributions in Maritime Domain’. Sec. Defence Lt General (Retd) Mian Muhammad Hilal Hussain was present during the briefing.

While interacting with the Committee members, Chief of the Naval Staff Admiral Muhammad Amjad Khan Niazi dilated upon prevalent security dynamics in Indian Ocean Region and maritime security challenges to Pakistan’s National Security. Naval Chief underscored that Pakistan Navy is ensuring the safety and security of international waters through collaborative and independent maritime security initiatives. The Admiral highlighted Pakistan Navy’s roles and responsibilities related to CPEC in detail. In this domain, effective and comprehensive measures have been taken to augment coastal defence and security of sea trade routes including approaches to Gwadar port.

The delegation was also appraised on the Pakistan Navy’s efforts and contributions towards creating maritime awareness and spur the growth of the maritime sector for the economic prosperity of the country.

Besides operational development plans, the Committee was also briefed on the Pakistan Navy’s contributions towards nation building and initiatives for the socio-economic uplift of the Baloch coastal community in the health and education sector.

On the occasion, the Chairman Senate Standing Committee on Defence, Senator Mushahid Hussain Sayed expressed satisfaction over PN’s operational preparedness and nation building efforts. The Committee assured its full support to PN in future developmental plans for safeguarding the maritime interests of Pakistan.

PPP and PTI win one seat each at AJK by-polls