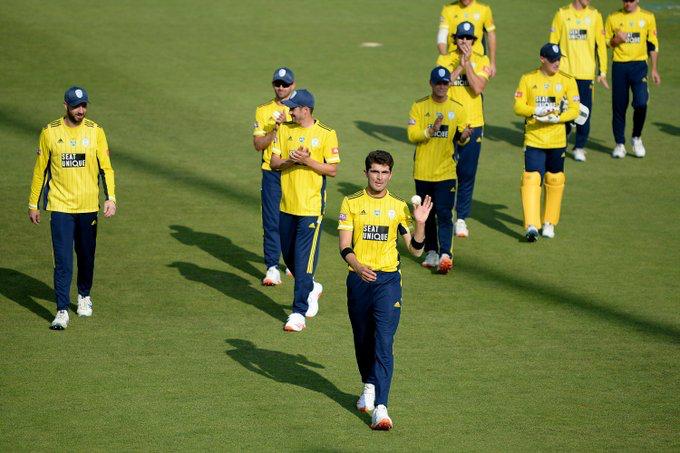 The 20-year-old is only the seventh player to take four wickets in four balls in a T20, according to ESPN Cricinfo.

Afridi was struggling this season for Hampshire before Sunday and was being taken by the batsmen to the cleaners. While conceding 191 runs, he had only picked up a single wicket for his team.

But in this match, according to the cricinfo report, he celebrated an amazing 6 for 19-Hampshire ‘s best ever T20 bowling figures, and the county’s second style hat-trick in their history.

The left arm fast bowler ran through the Middlesex tail, routing visitors to tear down the stumps of John Simpson, Steven Finn, Thilan Walallawita and Tim Murtagh one after the other. Hampshire, by 20 runs, won the contest.

In a short video clip posted by Hampshire Cricket on Twitter, Afridi said he was “really happy to finally perform well”. Commenting on the rocky start to the season, he added that “wickets weren’t really in his hands” and that he always tried his best.

In a tweet, he added that this feat would not have been possible without his parent’s prayers. “I am grateful to everyone at [Hampshire Cricket] for the opportunity and unconditional support. A heartfelt thanks to all my fans around the world.”

Alhumdulillah, all praises are for Almighty Allah SWT. This hat-trick was not possible without the prayers of my parents. I am grateful to everyone at @hantscricket family for the opportunity and unconditional support. A heartfelt thanks to all my fans around the world.#TheEagle pic.twitter.com/TT4baxrBo0

Hampshire lost opener James Vince cheaply on 6 out of 9 balls before Tom Alsop (25) and Sam Northeast (31) scored 32 runs for the second wicket before batting first. Vital contributions of 25 runs from Ian Holland and 15 runs from tail-end Ryan Stevenson brought the score of the team into 20 overs to 141/9.

Middlesex also got off to a poor start losing two wickets within 14 runs, in response. Simpson, however, took hold of one end and led his side’s fightback. He scored a gritty 48 off 40 balls but wasn’t able to find support from his teammates as Afridi ran the ball riot.

The spectacular spell of courtesy Afridi, Middlesex was restricted to 121 and fell short in the chase.