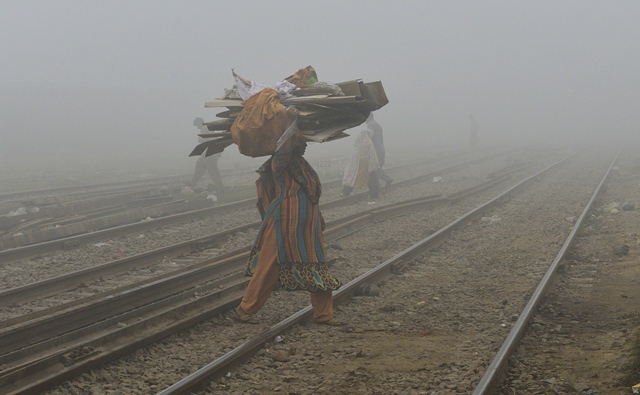 According to data released by the provincial environment department on Monday, the smog situation in Punjab, still hovering near “unhealthy” levels, is set to intensify over the next two weeks.

But the data showed that conditions would improve marginally after Nov 10.

The air quality index (AQI) in Lahore on Monday ranged between 143 to 210. Far more alarming was the reading for other cities: it was 295 for Faisalabad, 286 for Raiwind, 261 for Bahawalpur and 216 for Multan.

“Although alarm bells are still not ringing, they are not far off either,” an official of the Punjab environment department warned.

According to experts, the smog situation depends on two factors: (i) the pace of stubble burning on the Pakistan side of the Punjab border and (ii) the wind direction from the Indian side.

Stubble burning is banned in Pakistan, but not in India.

Currently, the wind is carrying smog from Pakistan to India, but it could change in coming days and start blowing from other direction.

When the wind direction changed, the air quality index declined by more than double the current level last year. The absence of rain during November would be another troubling aspect this year, if the weather assessment turns out to be right.

“It will make the situation extremely precarious,” according to an official of the provincial disaster management authority (PDMA).

A ban on smoke-emitting vehicles has also been launched by the Punjab government and it is seeking to minimise the number of vehicles on roads by staggering the timing of pick and drop in educational institutions in the public sector.

From November 7 to December 31, brick kilns using the old technology will be closed. If the need arises, the closure could be prolonged.

If the AQI crosses the 300 thresholds, a working group has proposed that educational institutions be closed.

It also proposed closing down shops at 7 pm and marriage halls at 9 pm.