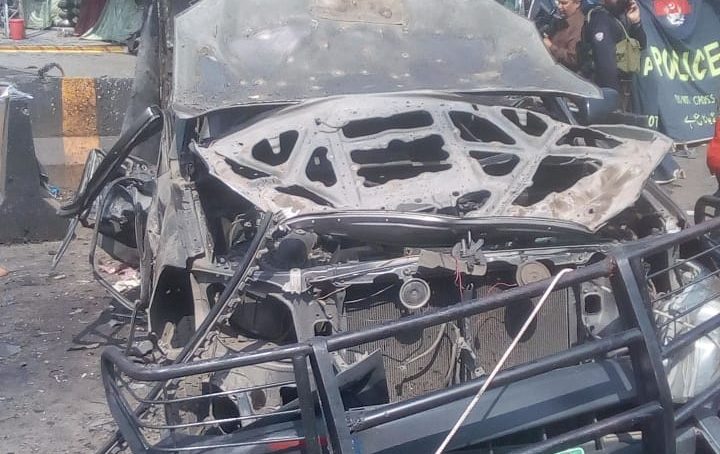 At least 10 people including three police officials were martyred and scores injured in a suicide blast outside the Data Darbar shrine in Lahore on Wednesday morning, authorities said.

According to police reports, the blast targetted a van carrying the Elite Force of Punjab Police.

Arif Nawaz Khan said 7kg of explosives were used in the blast.

According to DIG Operations Lahore Ashfaq Ahmad Khan, at least 25 people were being treated for injuries, some of whom were in critical condition.

“The blast took place around 8:45am outside Gate number 2, where the police personnel were deployed for security,” he said.

“It was a suicide bombing. The target was a vehicle of the elite force that was stationed outside the gate for checking,” he said.

Lahore Deputy Commissioner Saleha Saeed told media that one of the dead bodies brought in to Mayo Hospital was that of the suspected attacker.

“It was a suicide attack. Ball bearings were also used in the attack,” she told reporters.

Entry to the Data Darbar was sealed in the aftermath of the blast, and Zaireens were asked to turn away as police conduct an initial investigation into the incident.

Data Darbar, one of the largest Sufi shrines in South Asia that dates back to the 11th century, has been targeted previously, in a 2010 suicide attack that killed more than 40 people.

Pakistan’s push against extremism was stepped up after the country´s deadliest ever attack, an assault on Army Public School in Peshawar in 2014 that left more than 150 people – mostly children – dead.

Since then, security has dramatically improved, but major urban centres such as Lahore are not immune.

An attack in Lahore in March last year left nine people dead, while a major blast targeting Christians celebrating Easter in a park in 2016 killed more than 70 people.

SC orders removal of encroachments on Railways land in 15 days