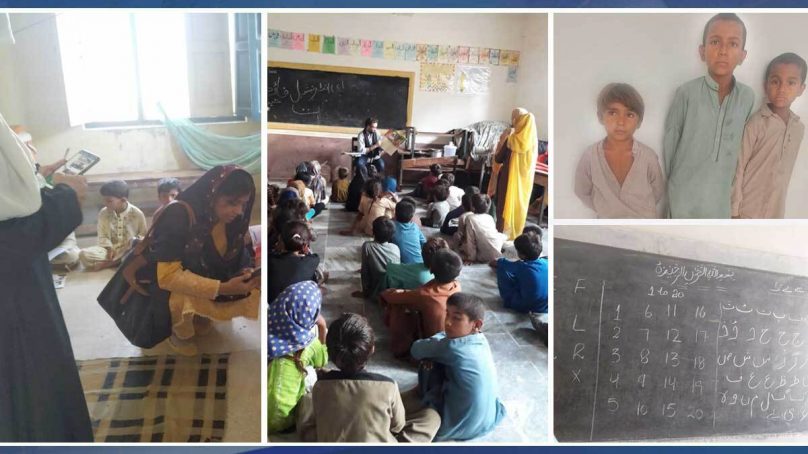 Sindh has been hardest hit by the recent catastrophic floods that have unleashed unimaginable suffering, death and misery on the poor and hapless people of Pakistan. The situation is all the much worse in Sindh where 23 districts have been completely destroyed and more than 140 million people have been displaced or affected due to the devastating floods.

Following his visit to Sindh, Abdullah Fadil, the UNICEF representative in Pakistan, claimed that 16 million children had been impacted by the flood.

He continued by saying that vital infrastructure including schools, water systems, and healthcare institutions are in a shambles and that displaced families do not have access to food or clean water.

On the one hand, flood victims of Sindh are facing health and food crisis, and on the other, flood disasters have had a profound impact on the physical and mental health of children.

These children in the relief camps are facing severe pain, fear, anxiety and mental torture, for they have not only lost their homes, their loved ones, their favorite toys and environment, but also their schools.

Sindh Education Minister Syed Sardar Shah expressed this fear in a statement and said that the educational activities of 20 to 22 million children in Sindh are feared to be affected.

So, how will the teaching process of children be restored in this emergency situation?

In this regard, the Sindh education department says that its first priority is to restore the teaching system, adding that tent schools are being established in all districts.

According to the sources of the department, 1,254 primary-level tent schools have been established so far, while the number of secondary schools is 146.

Noor Junejo and his wife are currently going to different flooded campuses in Hyderabad and teaching the children there voluntarily.

He said that children want to study and their response is very positive. “The children are in dire need of counseling as their trauma is huge and we are trying to help them and engage them in various curricular and extra-curricular activities according to their age groups.”

How important is it to restore educational activities in relief campuses?

In this regard, Tabsum Kausar, who works as a teacher-educator in the Government College of Education, says that it is very important to restore educational activities in the relief campus on a limited scale, even if only temporarily. This will benefit the affected children who have seen their houses sink, seen their belongings destroyed and people die.

He praised the Sindh Education Department which, he said, had taken many good steps in this regard. “Tent schools have been set up in many relief camps, while some teachers are also voluntarily teaching in relief campuses. Some teachers in our college education department who have relief camps in their colleges are teaching the children and this is a very good initiative,” he said.

Education expert Ahmed Qadri says that the damage caused to Pakistan’s education system due to the sudden disaster is irreparable. He, however, said that no one has control over this natural calamity.

“Currently, the welfare groups, the government, and the volunteers who manage to educate the children in the relief camps for flood victims are all making individual efforts to engage the children there in educational activities so that education can begin but be limited. So, we all should appreciate the efforts made in these difficult situations,” Qadri said.

He also said that along with the flood emergency, education emergency should also be imposed.

What should be done for the mental rehabilitation of flood-affected children?

In this regard, Khan Hassan Afridi, a well-known psychologist of Karachi, says that whenever there is a disaster like floods, internationally, a team of psychologists and psychiatrists is first formed to assess the children in the relief camp.

“First of all, a team of experts looks at what mental illnesses these children are facing,” he said. “Children affected by these floods are going through post-traumatic stress disorder (PTSD), which is quite upsetting.”

Mr Afridi went on to suggest that flashbacks of the flood are running through their minds, causing these children to have nightmares. He said that these children are also suffering from severe fear and inferiority complex at this time.

Children in these situations become distant from themselves, yearn to leave their environment, weep occasionally, and occasionally complain of headaches, he said.

He added that psychological counselling is currently necessary for these kids in order to rebuild their self-esteem.

He emphasized the need for counselling for the afflicted children, stating that youngsters will be affected by the flood disasters and will be delayed, necessitating an urgent need for their mental education and training.