The government will not be blackmailed by the opposition: PM Imran Khan
Recent View all
Entertainment
Read more

Home  »  National • News   »   The government will not be blackmailed by the opposition: PM Imran Khan 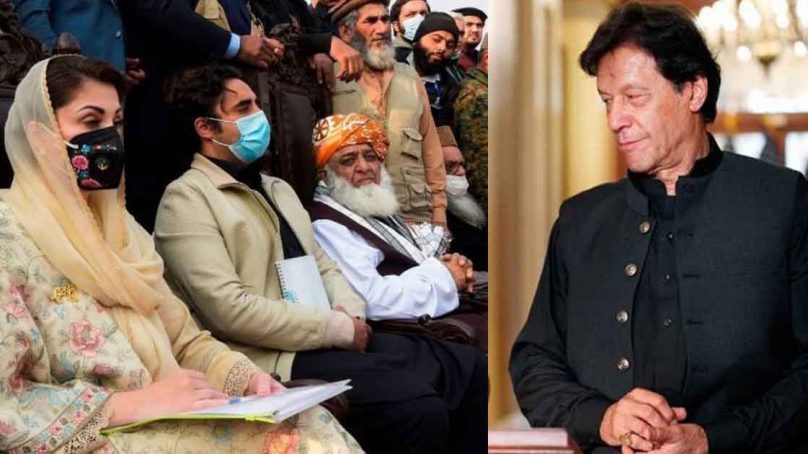 The government will not be blackmailed by the opposition: PM Imran Khan

Prime Minister Imran Khan said that the leaders of the opposition parties are well aware that he would not give them the National Reconciliation Ordinance (NRO), which is why they are putting pressure on Pakistan Army.

The prime minister referred to the Democratic Movement of Pakistan, an alliance of 11 opposition parties established to oust the ruling PTI from power on Sunday in Larkana, asking the “selectors to withdraw their support for Imran Khan.”

Addressing a meeting of the government spokespersons on Monday, PM Imran said, “If the issue of the PDM had been rigging in elections, they would have joined us in electoral reforms, but they chose not to participate in legislation in two-and-a-half years.”

PM Imran dubbed the opposition parties a group of liars, saying that people cannot be misled by lying. “The government will not be blackmailed by the opposition.

“If we would’ve amended the NAB (National Accountability Bureau) law on their request, they would not be on the streets today,” the PM said.

“The PDM is an unnatural movement, as to this day, the people have never come out for anyone’s personal interests.”

Imran said that the PDM was not a problem for them. “We are focused on resolving the issues of the people.”

He said that the PDM’s anti-government movement had no future. “Parliament is the best forum for dialogue and problem-solving. But up till now, the opposition has used parliament for its own benefit.”

He instructed the spokespersons to inform the people about the formation and quantity of assets by JUI-F chief Maulana Fazlur Rehman.

At the meeting, it was also decided to take action against JUI-F chief Mufti Kifayatullah for his anti-military rhetoric.

Imran asked the participants to respond effectively to the remarks made by Kifayatullah.

Sources said that a case against Kifayatullah will be filed by the interior ministry.

Separately, Prime Minister Imran met his Parliamentary Affairs Adviser, Babar Awan, and told him that politicians who pointed their fingers at state institutions could never be considered democratic flag bearers.

The Prime Minister said that all the pillars of the state were working for the progress of the country within their own jurisdiction.

“Strengthening state institutions is vital for continuity of democracy,” he added.

Dr. Babar Awan said that leaders, aiming for personal interests to drive the country into a dark age, had no future of their own.

He described the government’s economic stability policies and coronavirus prevention as major accomplishments.