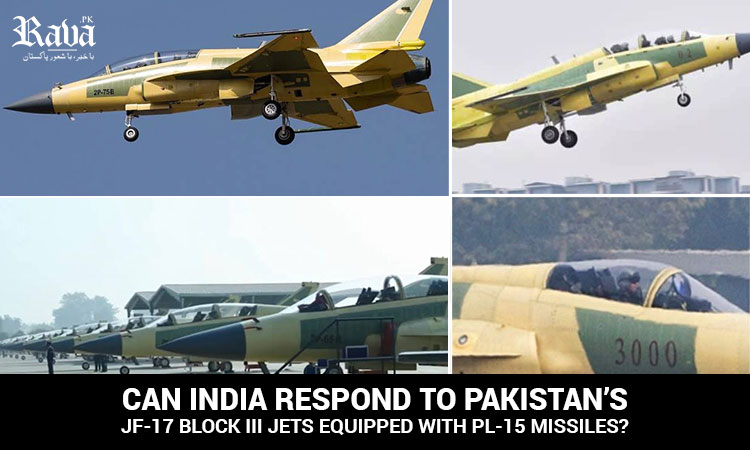 Pakistan is poised to establish its ultimate superiority to India in air combat: the Pakistan Air Force’s JF-17 Block III variant, launched in December 2019, will surely tilt the balance power in Pakistan’s favor.

With the Indian Air Force’s plan to massively invest millions of dollars for the modernization of its aging fighter fleet, and its orders for select Su-30MKI fighters and Rafale and MiG-29 medium fighters, as well as additional contracts for the acquisition of foreign jets, the PAF’s decision to come up with the JF-17 Block III Jets bodes well for the country’s security and sovereignty.

Already, Pakistan enjoys an edge over its arch-nemesis thanks to its two major programs: the JF-17 and Project AZM. At the moment, the most advanced variants of the JF-17 the JF-17B and JF-17 Block II are by any given standards far superior to India’s substandard fighter jets. The JF-17 is the only Pakistani fighter other than the F-16 equipped with active radar-guided air-to-air missiles: the PL-12 with a 100km range.

The JF-17 Block III, dubbed as a real game changer, includes some limited stealth features, a more powerful engine, a larger AESA radar, the first ever infra-red search and track system, new electronic warfare systems and PL-15 long-range air-to-air missiles. With an estimated range of 200-300km, the PL-15 will outrange all of India’s current air-to-air missiles built for use against fighters – from the 80km range MICA used by Rafale and Mirage 2000 jets to the 110km range R-77 used by the MiG-21, MiG-29 and Su-30MKI. With Pakistan potentially fielding over 100 of these new fighters, including both single and twin seat variants, the JF-17 Block III is arguably a force to be reckoned with.

In an interview with Russian state media outlet, Indian Air Force veteran Vijainder K Thakur spoke at length — and candidly — about the threat posed by the new JF-17 variant: “The India Air Force allowed itself to be outgunned by focusing on platform acquisitions, rather than weapon system and sensor upgrades. With sufficient military foresight, the IAF could have armed its Su-30MKI with longer range air-to-air missiles acquired from Russia rather than continuing to rely on the lesser ranged missile ordered years ago from Ukraine.”

Mr Thakur’s blistering critique on IAF’s lackadaisical approach to strengthening its aerial supremacy over Pakistan is an indictment that India has yet to go a long way before it can even think of waging any war with its nemesis. Air force mavens concur that the PAF, despite being small in size, enjoys ultimate superiority to India when it comes to cutting-edge weaponry and state-of-the-art fighter jets.

The JF-17 Block III jets well and truly represent a serious and grave threat to India. Is it ready to step up to the Herculean challenge of outgunning Pakistan with its ageing fleet and a few contracts that still haven’t see the light of day?