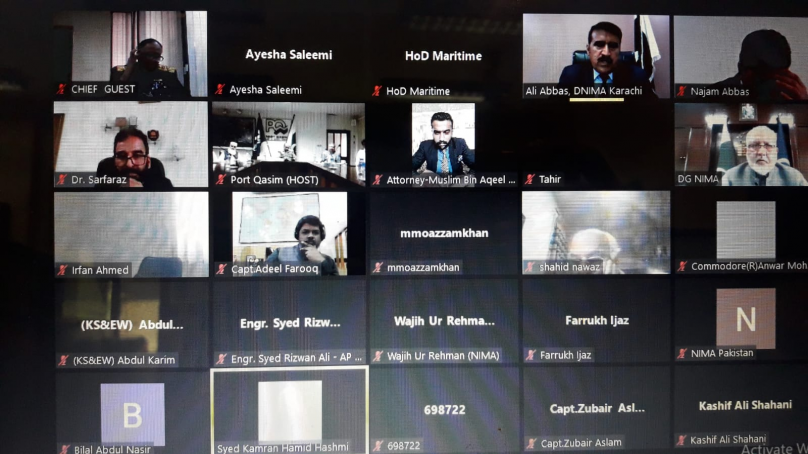 “Around the world, 3 billion people depend on marine and coastal biodiversity for their livelihoods. Yet, according to predictions, tropical coral reefs may disappear by the turn of the century, and by 2050 there could be more plastic in the ocean than fish.”

The National Institute of Maritime Affairs (NIMA) organized a webinar highlighting the importance of the United Nations Agenda 2021 to 2030 and ensuring scientific maritime research in Pakistan on the 18th of February 2022.  On the occasion, Director NIMA Karachi Commodore (Retd.) Ali Abbas SI (M) highlighted the salient points of the United Nations Decade of Ocean as a moderator. Vice Chief of Naval Staff Vice Admiral Faisal Rasul Lodhi HI (M) graced the event as the chief guest. Vice Admiral (Retd.) Abdul Aleem HI (M), Director General NIMA welcomed the participants and highlighted the significance of the topic. He said the National Institute of Maritime Affairs is proud to organize this webinar on this significant agenda which has linked people globally for collective efforts.

He further said that there are 3 billion people around the world who depend on marine and coastal biodiversity for their livelihoods. Yet, according to predictions, tropical coral reefs may disappear by the turn of the century, and by 2050 there could be more plastic in the ocean than fish. Therefore, the implementation of the United Nations vision on the ocean decade is essential.

During the session, marine experts read their papers and shared pertinent views. Guest speaker Mr. Hubert spoke on the purpose and benefits of the UN Decade of the ocean and highlighted the importance of Oceans for the maritime economy. During the address, he talked about modern trends in the maritime industry.

The second speaker, Dr. Najam Abbas from East West Institute Brussels highlighted the implementation strategy for developing countries. He emphasized that Pakistan should make a timeline with clear targets in order to get benefit from the ocean decade. He said that the Pakistan navy can play a significant role in improving collaboration amongst all stakeholders he emphasized promoting female participation in Marine Education and Training during the UN Ocean Decade.

While the third Speaker Dr. Asif Inaam HoD Maritime Sciences Bahria University described the opportunity and challenges of the decade of the ocean for Sustainable Development-Implications and response for Pakistan and described the scientific objectives. He said that the involvement of the scientific and technological community is crucial for maritime growth and can help in accelerating scientific initiative, exploring opportunities for economic development.

Vice admiral Faisal Rasul Lodhi HI (M) Vice Chief of the Naval Staff during his address said that the Pakistan navy is cognizant of its responsibilities for the development of the maritime sector in the country. He said that maritime Science and Technology Park (MSTP). being established at Karachi is a significant initiative on PN to achieve the ocean decade agenda. He emphasized that the relevant recommendations of the webinar be passed on to relevant stakeholders for implementation. He appreciated the efforts of NIMA in holding the successful event.

The event was attended by a large number of eminent personalities, maritime domain experts Govt officials’ students, and key maritime stakeholders. In the end, the DG NIMA Vice Admiral (Retd) Abdul Aleem HI (M) thanked the chief guest, speakers, and participants for their interest and availability on zoom. He assured that NIMA will continue to conduct more informative webinars and activities for the promotion of the maritime sector of Pakistan.