Transgender: A Neglected Being of Our Society
Recent View all
News
Read more

Home  »  Editors Choice • News • Reviews   »   Transgender: A Neglected Being of Our Society 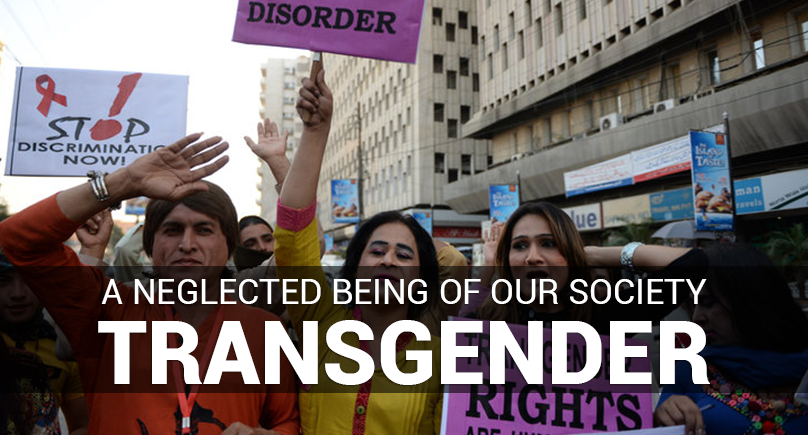 She is first a human being, then a transgender

Transgender – A word that’s considered abusive or taboo in our society. We live in an independent country where everyone is entitled to certain rights. But there’s one class which is deprived of these rights, and is generally left out from the category of normal human beings: transgender people.

In this society, we are entitled to the right of freedom of speech, but this section, which is known by such labels as “transvestite’, ‘eunuch’ or ‘transgender’, has absolutely no right to express itself.

If you look at their lives, each smiling face has a story to tell. Behind every decorated face, there are so many painful stories and bitter memories that one simply cannot hear without tears in eyes.

Perhaps we have become so inconsiderate that we never sympathize with them, nor have any of us looked and thought about their suffering.

The transgender is that part of our society who, from birth to death, embraces nothing but sorrow, pain, humiliation, like a thirsty man in the scorching desert. In spite of society’s enduring humiliation, lust, and apathy, they beautify themselves every night, sometimes for begging and sometimes for fulfilling others’ sexual gratification.

They are beaten, abused, killed.

In our society, there’s also an impression that they barely care about hygiene and cleanliness. Due to other similar issues, they are far from the mainstream of usual life. About 90% of them meet their daily expenses as sex workers, while about 8% of their livelihood depends on dancing at weddings, birthdays or childbirths.

Whether it was a wedding ceremony at home or the birth of a child, transgenders were invited everywhere. But as times and trends have changed, so have people’s thinking; when people look at them, they turn their eyes away.

Even the government does nothing to improve their lot in life. There are no institutes for their training and education where they can earn a living by learning a skill. In such a situation, they have no choice but to beg and work as sex workers. This attitude of society has led to their worst exploitation.

In addition to society’s bitter and inhuman attitudes, transgender people are also faced with an appalling financial situation.

Owing to our misperceived social superiority, the transgender people cannot work at any institution, nor is education their destiny. Regrettably, these people have been totally marginalized, and if someone from their own community seeks to raise their voice against these injustices, they are either silenced or killed.

Times are changing, but people’s attitudes towards transgender people elude any positive change, with the latter still regarded as social outcasts.

They suffer just as much from the loss of loved ones and the breakdown of relationships as other people; their siblings do not even like to keep in touch with them. The truth is that it’s not transgenders that suffer the stigma of rejection from society, but the siblings and parents of such people who choose to disengage from them out of the fear of society.