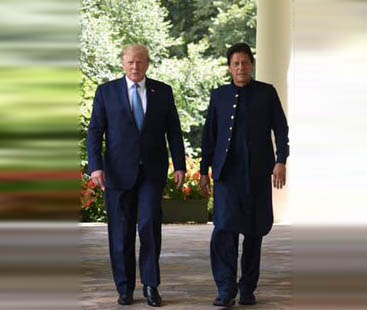 Trump offers to mediate Kashmir dispute between India and Pakistan

President Donald Trump on Monday offered to mediate the decades-long Kashmir dispute between India and Pakistan, a move that would signal a shift in long-standing US policy that the issue must be solved bilaterally.

“If I can help, I would love to be a mediator,” Trump said at the White House, where he was hosting Pakistan s Prime Minister Imran Khan. “If I can do anything to help, let me know,” Trump said.

President Donald Trump said that Pakistan was helping the US advance the Afghanistan peace process, as he hosted Prime Minister Imran Khan at the White House.

“I don t think Pakistan respected the United States” in the past, Trump said, but “they are helping us a lot now.”

President Donald Trump, speaking at a White House meeting with visiting Pakistani Prime Minister Imran Khan, said on Monday the United States is working with Islamabad to find a way out of the war in Afghanistan.

Trump held out the possibility of restoring U.S. aid to Pakistan, depending upon what is worked out, and offered assistance to Islamabad in trying to ease strained ties with India.

Khan told Trump there was only one solution for Afghanistan and that a peace deal with the Taliban was closer than it had ever been. He said he hoped in the coming days to be able to urge the Taliban to continue the talks.

President Trump said he looked forward to a pleasant meeting with Prime Minister Imran Khan who is a very popular leader of Pakistan. He said Pakistan is a great country that helped the US to a great extent in moving forward the peace process in Afghanistan and we are working with Islamabad actively. He said we are continuing to bring down the number of troops in Afghanistan.

Replying to a question, he said the US has already withdrawn certain number of troops from Afghanistan. He, however, said he will not take any step in removal of troops hastily.

He said we will discuss military, trade and host of other issues during the meeting. President Trump hailed PM Imran and Pakistani people as a great nation, adding that he would surely visit Pakistan if invited.  He said  “I believe that we will in a very short period of time start having serious trade with Pakistan.”

Speaking on the occasion, Prime Minister Imran Khan said he really looked forward to the meeting with the US President. He said the US is vital for Pakistan and we have relations spanning over many decades since independence of our country. Imran Khan said Pakistan fought as a frontline state both during Soviet invasion of Afghanistan and also in war in terror. He said there is no military solution to the Afghan conflict.

He said Pakistan needs economic stability as we have been fighting the war against terror for the last fifteen years during which we suffered casualties of seventy thousand people and loss of 150 billion dollars in damaged infrastructure.

He said peace and stability in Afghanistan is in best interest of Pakistan. He said only talks can resolve the decades-long conflict. Imran Khan said our role is to bring Taliban to the negotiating table with the Afghan government. He said we are closer to a peace deal in Afghanistan.

The Prime Minister hoped that the US can play its role in bringing India and Pakistan together.

Trump likely to ask Pakistan for its role in Afghan peace