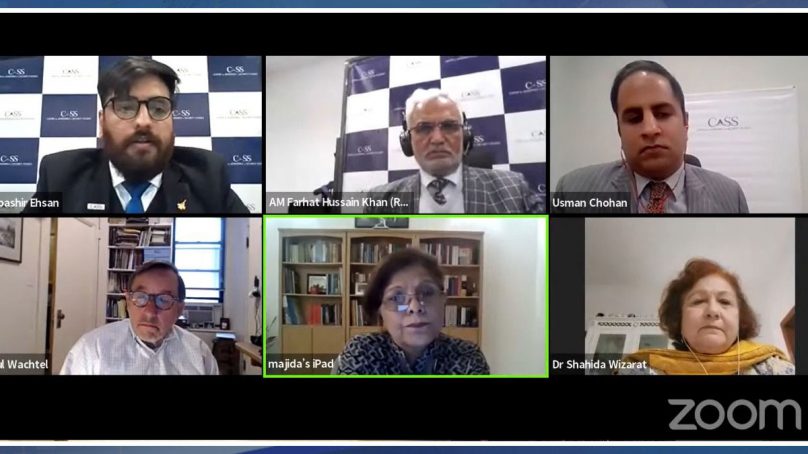 “Transparency, accountability, and communication are hallmarks of good central banking, more so than independence.” This was the key message of leading economists at the Webinar on ‘Central Bank Independence: Reformation or Deformation?’ organised by the Centre for Aerospace & Security Studies (CASS) in Islamabad.

The discussion focused on the global evolution of the Central Bank Independence (CBI) debate and merits and demerits of CBI in Pakistan’s context.

Speaking from New York, Prof. Dr Paul Wachtel provided a comparative assessment of Central Bank Independence (CBI) in advanced and emerging economies and stated that CBI (or even the perception of it) should not be taken for granted in emerging market countries. He stressed that CBI was developed with the monetary policy role first and foremost, but reflection on post-global economic crises calls for more nuanced understanding. As a consequence of crisis experiences (including the recent COVID-19 pandemic), discussion on the principles of central bank governance had moved away from CBI and now emphasize goal setting, transparency, and accountability. In his assessment, the global financial crisis added financial stability to a central bank’s role which involved close interaction between an independent central bank and the government as CBI cannot be cleanly separated from a country’s political institutions, he stressed.

Dr Shamshad Akhtar maintained that the ‘SBP Amendment Act, 2021’ was a welcome development considering that the Act of 1956 had outlived its life. Moreover, she commended the Act for its streamlined objectives of price stability, financial stability and economic growth, and for the clear characterisation of the Bank’s functions. Nonetheless, she stressed that no matter how complex, maintenance of expansionary policy would require monetary tightening as well as lowering and scaling back inflation expectations. In her view, the State Bank’s independence needs to be accompanied by institutionalised mechanisms for monetary and fiscal coordination and greater accountability backed by more robust transparency.

Sharing her concerns about the ‘SBP Amendment Act, 2021’ Dr Shahida Wizarat argued that the Act was not about the State Bank of Pakistan’s autonomy, rather its main goal was to control and manage Pakistan’s economy and to stop it from pursuing its strategic goals and objectives. In her analysis this included sabotaging CPEC and regional integration; increasing debt-to-GDP ratio through borrowing from commercial banks at exorbitant rates and over the long-term making it difficult to provide resources for defense and development; reducing Pak-China and South-South trade; while increasing the financial portfolios of IMF shareholders.
Discussing the public value of CBI, Dr Usman W. Chohan outlined how CBI had evolved differently around the world, based on local requirements and local contexts. In his view, each country, including Pakistan, should design its monetary authority according to the specifications of its local needs. Questioning the timing of the SBP Amendment Act, Dr Chohan advocated that in a well-functioning governance architecture, many institutions are allowed functional, goal or purely institutional independence, but the privileged treatment of the SBP, particularly when the economy requires stronger fiscal-monetary coordination during difficult conditions; and especially when imposed from outside, was suspect. He advised that the elements of Pakistan’s national power, including its economy, should be in alignment with the country’s core national interests. By making the central bank an independent and separate pillar of power over sensitive domains like monetary, price, and currency stability, Pakistan may not be aligning this instrument towards national interests, and risks compromising its economic sovereignty, he warned.

While delivering the Concluding Address, Air Marshal Farhat Hussain Khan (Retd) weighed the pros and cons regarding CBI, especially in terms of the impacts of the recent SBP Amendment Act as discussed by the panel. According to him, Pakistan handled the COVID-19 pandemic very well and the State Bank of Pakistan had an important role to play in supporting the Government of Pakistan’s decisions. However, given the changes in the new Act, he hoped that the government would not lose its authority over financial management, especially if a crisis like the pandemic, occurs again. He reiterated the panel’s consensus that transparency, accountability, and communication were more important for good central banking than independence.

The webinar was attended by bankers, scholars, journalists and students of IR and economics, who actively participated in the interactive question and answer session.

PUMHSW Student Claims She Was Harassed, Tortured by University’s Director