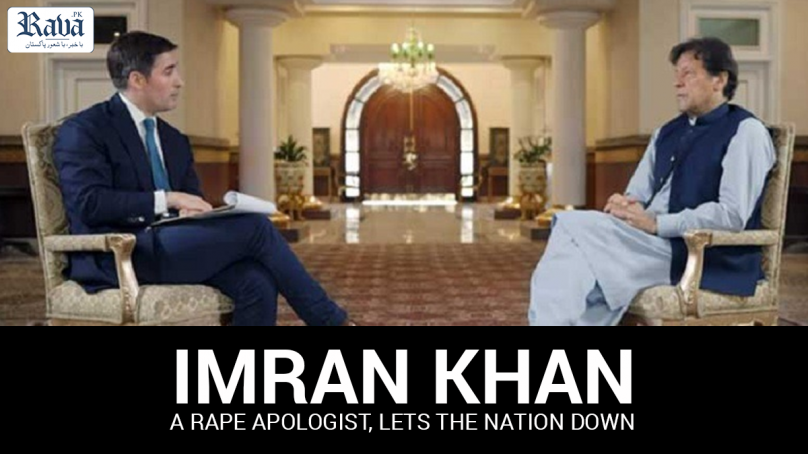 Imran Khan, a rape apologist, lets the nation down

“Small clothes impact men unless they are robots.”

And just like that once again women are held responsible for the prevalent sexual abuse. This is not the first time we have heard these statements but coming from the Prime Minister of Pakistan who is an Oxford graduate, who has spent a major time of his life abroad, who is more educated than any other leader we have seen, it is appalling. It is sickening to see such a gentleman blaming women’s clothing for rape.

I have a few questions:

What about women in a burka who get raped?

What about children who get raped?

What about corpses who get raped?

What about animals who get raped?

Are they also supposed to be blamed too?

Men are not robots, right? What about the men who see women in small clothes, do not immediately go and rape them, and mind their own business? Are they robots?

Men are not robots but they are humans and Allah has given humans the sense of right and wrong.

Pakistan is a nation that is obsessed with women’s clothing, where there is shamed attached to what women wear, where “clothing is one’s personal choice” is an alien concept, where a man can get away with any monstrous act.

The remarks of our honorable prime minister have only validated the rapists and their heinous acts. This has given them a license to do ANYTHING they want to do a woman because now they know the PM is going to back them. It is sad. It is disgusting.

If you conduct a survey, you will not even find one woman who has never been harassed in one way or the other, whether they wear small clothes or a burka.

Imran Khan has proved how it is the mentality that is to be responsible and not a victim. Rape is nothing but a disgusting mind trying to take advantage of his power. It is the sick human that gets aroused by any living being clothed or unclothed in their sight because they know there is no accountability for it.

I wish before uttering those words Imran Khan had thought about the underprivileged population who faces this every day but has nowhere to go and report because their honor will be mocked in the society.  I hope our PM understands that as he also has sons who are growing in the same world and he has to raise them right to be respectful towards women and men.

If a man like Imran Khan can have such opinions, we cannot envision the thoughts of a man who doesn’t know what education is. When your own PM can’t protect you, we are at the mercy of God only.

THERE IS NO JUSTIFICATION FOR RAPE! YOU CAN’T ABSOLVE RAPISTS FOR HIS CRIME AND CALL IT CULTURAL IMPERIALISM. PERIOD.

PAF officers promotions to the rank of Air Vice Marshal