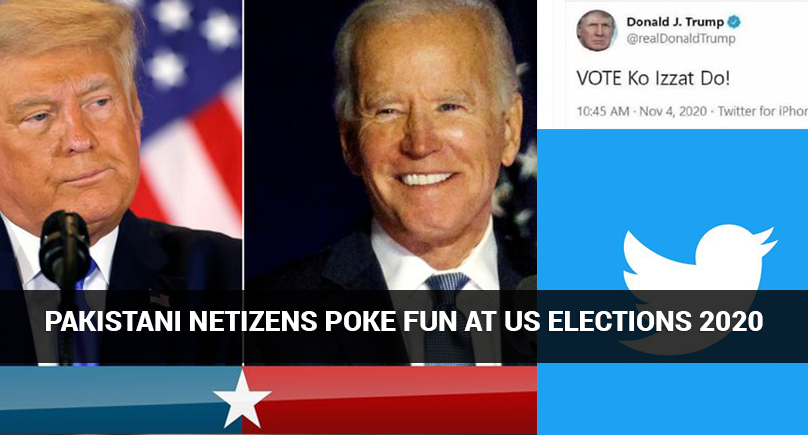 The event everybody has eyes on – US Elections 2020!

The polls have been closed now, counting and unofficial results from different states are coming forward. News channels are fully galvanized with the hype of US election, dubbed as the most ‘historic’ elections in the recent history of the USA.  It is Trump Vs Biden!

Pakistani netizens seem to be enjoying US elections. In fact, US election has been the butt of all election jokes.

Here are some fun tweets to give you a break from the nail-biting situation of the election:

One Twitter user posted a screenshot of Donald Trump tweeting as: “Vote ko izzat dou” or “respect the vote,” a popular chant of Pakistan’s former ruling party, the PML-N.

A Twitterati paired the anti-government rallies of the Opposition in Pakistan and the dance of Donald Trump with the anthem of the PPP and that’s exactly what you need to see today.

The irony of Pakistanis, who take no interest in their own election but closely follow the US elections, was pointed out by Twitterati.

pakistanis on own election day: i've no interest in politics, all politicians are same.

How can we miss Aunty gorment?

Both Biden and Trump have already declared their victory in #USElection

Seeing the polls coming to an end, both Trump and Biden took to addressing their supporters at night and, needless to say, this happened:

Jeremy McLellan, a comedian who loves everything Pakistani, cast doubt over how real change would take place if Biden is elected to the Oval Office with the Republicans still controlling the Senate,”Nothing will get done except Biden’s terrible foreign policy”..

Democrats winning the presidency and House with a Republican Senate means that nothing will get done except Biden’s terrible foreign policy. Get ready.

How to treat Hair Loss at Home? Quick Remedies