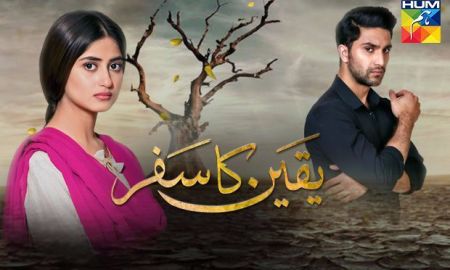 Yakeen Ka Safar Ends and it left us feeling like emotional potatoes!

SPOILER ALERT! IF YOU HAVE NOT WATCHED THE LAST EPISODE OF YAKEEN KA SAFAR TURN AWAY AS:

Now that you have been warned, let’s talk business!

The episode was full of revelations, emotions and a very tragic incident! From a pleading apology from Zoobia’s brother, to Zoobia attempted suicide and a heart-melting love confession between Azfi and Zoobia.

The story of Zoobia played by talented Sajal Aly has been the centre of drama story-line. The traumatic incidents she experienced at home and from the hands of her love-interest has made her story much more relateable for the audience.

Azfi on the other hand, played by none other than Ahad Raza Mir, faced his share of traumas throughout the series from the death of his beloved brother, played by Shaz Khan, who played the role of a truth-bearing lawyer, from the broken engagement with the love of his life.

Both characters developed their stories parallel to eachother and eventually ended up working in the same hospital as doctors in the beautiful valleys on Neelum.

I am not going to repeat the story line in this post however I would like to shed the light on a very serious issue raised in this drama series. The issue of using POWER in the wrong way. From the very first episode, Yakeen ka Safar has given us a blatant picture of the use of power against weak ones. From domestic violence on Zoobia’s mother, to the rape of Nori, all stories have portrayed the role of power at its best.

The subject, though being very sensitive is our patriarchal society has raised many questions about why is it so hard to raise voice against abuse and oppression. Why are we so caught up in the idea of ‘Duniya kia kahegi?’ that we keep living in hell like relations and conditions. And most importantly, why there is such little hope for humanity!

The story-lines for Yakeen ka Safar did try to answer some of the concerns raised above and we hope to see more serials focusing and raising awareness on issues like these.

What is right age to have children? Breaking Myths and Stereotypes

4 scientists explain how poverty can affect our brain