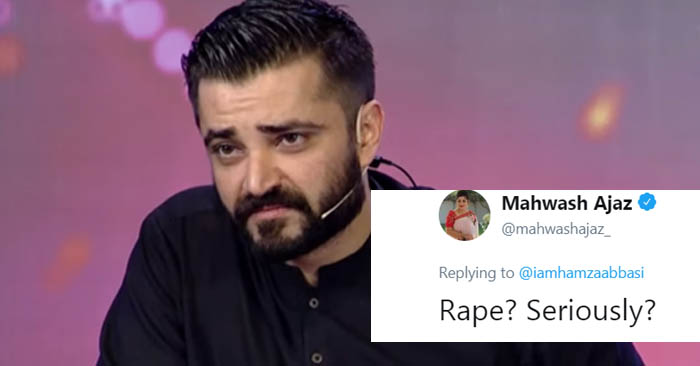 Actor Hamza Ali Abbasi remains active on social media and gives his opinion on trending issues either it’s from entertainment or politics.

In his recent statement the actor said that this has been the first time in the history of the country that the ‘big fish’ have been arrested by the civilian government.

He continued on to say that people have been viewing these arrests as a conspiracy because it has never happened for the country before. He closes the tweet by comparing ex-President General Musharraf to the main figures of the parties that were in power in the past and taking a few names.

1st time in the history of Pak a civilian Govt arresting THE BIG FISH who have raped Pak for decades! Maybe why sum think its a conspiracy bcz its never happnd be4: & be4 u say "MUSHARRAF", he is absconder just like civilians Sharif sons, Ali Imran, Ishaq Dar, Altaf Hussain etc

Rape jokes are not funny.

Rape is not something that can be described as anything other than sexual violence.

Raped? Seriously Hamza, from all the vocabulary you learned to pass English Essay at CSS, you choose to use a word like rape here? https://t.co/fLYXhEY1rA

5 Million And Counting: Assortment at Daraz Grows To Include International Products, Digital Goods And More