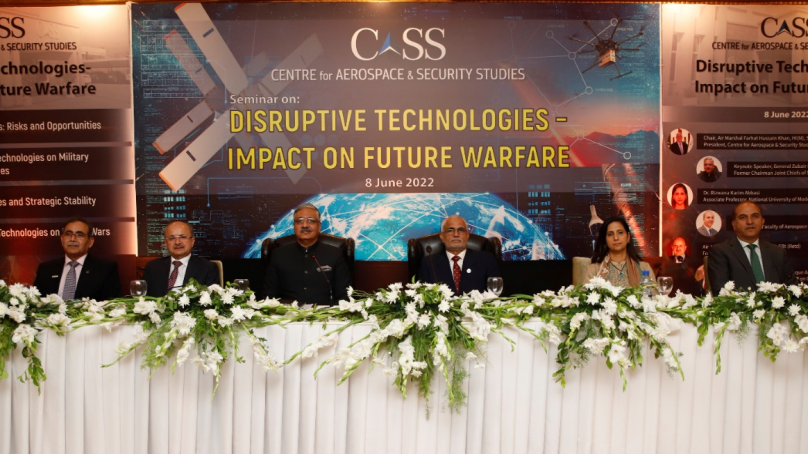 20 June, 2022: Pakistan needs to harness emerging technologies to strengthen national security and national sovereignty. This was the key message of former senior military officers and eminent intellectuals at the seminar on ‘Disruptive Technologies – Impact on Future Warfare’ organised by the Centre for Aerospace & Security Studies (CASS) in Islamabad.

Air Marshal Ashfaque Arain (Retd), while delivering the Opening Remarks, highlighted those new technologies offered enormous opportunities for civilian as well as defence sectors, but also presented new vulnerabilities and security challenges. While analysing the role of state actors and non-state actors, he cautioned that the latter had greater prospects of exploiting many of the easily accessible technologies in inventive and disruptive ways.

This was especially important in the case of nuclear-armed adversaries with unresolved disputes, mutual distrust, and shared borders, significantly reducing reaction time, he said. In his Keynote Address, General Zubair Mehmood Hayat outlined how disruptive technologies had now become a new toolkit in the hands of policymakers and his assessment, their greatest impact would be in the political domain as they would disturb the existing balance of power. He explained that such technologies would not only impact the military but also the economy significantly. On the military side, all three traditional domains would be impacted to the extent that the character of the war was likely to be changed fundamentally, the General said. He warned how Artificial Intelligence, if left unbridled, could threaten the very existence of mankind. General Hayat recommended that as a nation, Pakistan needed to be part of the debate and process to ensure human control over these technologies. ‘Disruptive technology is likely to create technical apartheids. We, therefore, need to harness it as a catalyst of change to strengthen our national security and national sovereignty,’ he concluded.

Dr Rizwana Karim Abbasi underlined that disruptive technologies could erode the foundation of ‘Deterrence Theory’, thereby undermining nuclear strategic stability through its effect on nuclear second-strike capability, including C4ISR and force postures. In her assessment, new technologies could contribute to accidental or inadvertent nuclear escalation by threatening the dual use of C2 assets in space and cyberspace by squeezing the reaction time of decision-makers. She stressed that Confidence Building Measures across the nuclear spectrum were important, and urged that states developing their hypersonic weapons should be encouraged to keep their nuclear and conventional delivery vehicles separate, distinguish clearly between tactical and strategic applications and increase the time to launch them where possible. Dr Abbasi also recommended that an international agreement on the known deployment of hypersonic weapons and a ban on autonomous nuclear-armed delivery systems as well as a moratorium on targeting nuclear command and control systems was a need of the hour.

While analysing the defence and security dimensions of specific disruptive technologies, Air Vice Marshal Faaiz Amir (Retd) highlighted that extensive use of space, using satellites, had become crucial to modern warfare and ‘no nation should expect to win a battle without support from space.’ However, when it comes to the use of drones, he remarked that while they were part of the evolution of airpower, their current generation remained vulnerable to electronic warfare and air defence systems and therefore, was unlikely to shift the operational balance towards the offensive side.

The speaker cautioned that cyber warfare could emerge as a greater threat to Pakistan, both in peace and war due to the Indian advantage which resides in her access to American, Israeli and Russian equipment and technologies.

Dr Adil Sultan was of the view that there was a tendency to oversell new inventions and their potential to change the character of warfare. However, he also pointed out that some disruptive technologies could be employed for non-kinetic warfare and provide additional incentive for states to engage in limited warfare without risking a major escalation. He pointed out that technology was evolving at a very fast pace, making it difficult for technologically-dependent countries like Pakistan. He expressed disappointment that due to a relatively weak Research and Development infrastructure and disconnect between various national stakeholders, developments in emerging technologies were not being optimally utilised for national development needs nor military purposes.

While delivering the Concluding Remarks, Air Marshal Farhat Hussain Khan (Retd) thanked the speakers for their in-depth analysis of emerging technologies, especially their impact on Pakistan’s national security, defence and development. He shared that air power, with the integration of disruptive technologies, had now become an instrument available to political-military leadership, especially for adversarial countries, to achieve their politico-military objectives with speed. President CASS recommended that in order to catch up with the rest of the world in the technological domain, Pakistan needed to strengthen and enhance Public-Private Partnerships in this area as well as build industry-academia linkages.

The seminar was attended by a large number of diplomats, senior military officers, heads of various think tanks, scholars, journalists and students, who actively participated in the interactive question and answer session.