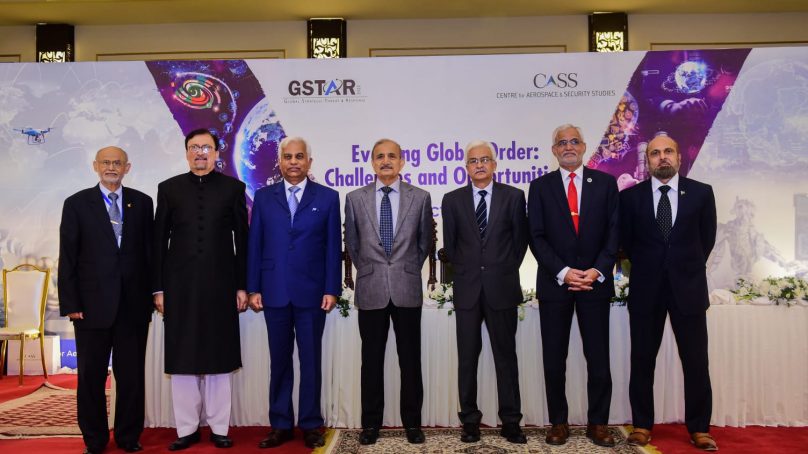 It is time for major powers to avoid polarisation and adopt a co-operative rather than confrontational approach to resolve global issues as humanity deserves peace.

The US-India strategic partnership, especially in critical  dual-use technologies, would upset the regional balance of power in South Asia.

This was the key message of the flagship Global Strategic Threat and Response Conference on ‘Evolving Global Order: Challenges and Opportunities’ organised by the Centre for Aerospace & Security Studies (CASS) in Islamabad.

Addressing the Concluding Session as Guest of Honour, Vice Chief of Air Staff Air Marshal Muhammad Zahid Mahmood said the international moot would help create awareness among all segments of society, particularly practitioners about the seriousness of the security environment, both at the global as well as regional level. He said unfortunately, international organisations responsible to ensure peace and stability across the globe, did not have the wherewithal to counter the fast-paced technological developments in space, primarily because the present international system did not have the power to block any state from using space for military purposes. He cautioned that selective sharing of these technologies, especially in a conflict prone region such as South Asia was leading towards strategic instability; and urged all nations to work towards peaceful use of these technologies for betterment of humanity and formulate rules and an international framework for their military applications.

In his Keynote Address, Air Commodore R. Shaun Clarke discussed why the spectre of fully autonomous air was well within reach, and why there was little confidence in banning it. According to him, autonomous air was no more paradigm shifting in warfare than the arrival of air power itself, and that wasn’t banned, especially since autonomous air has been around for a long time; could ultimately be more reliable than humans; bring new levels of precision; and be more humane in war with fewer casualties. He was of the view that attempting to ban technology in a war that had such high utility outside war would be novel and achieving consensus to ban the ongoing development of autonomous air extremely improbable. The Keynote Speaker predicted that the political consensus necessary for a meaningful ban on autonomous air would be challenging, especially since countries like China, Israel, Russia, South Korea, Australia, UK, US (apart from 90+ others) were already significantly invested in higher order development of autonomous air at some level.

Dr James J. Wirtz opined that when it came to the militarisation of space, the world was at an inflection point. Space-based communication, intelligence, reconnaissance and surveillance systems were figuring prominently in peacetime and wartime military operations. Kinetic and non-kinetic spaced based weapons were being tested, if not operationally deployed on a day-to-day basis by the great powers. In his judgement, hypersonic vehicles promise to open pathways to new types of military operations in space.  Nevertheless, he felt that competing militaries had not yet gone ‘all in’ when it came to the militarisation of space. In their joint presentation

Dr Damon Coletta and Dr Sannia Abdullah discussed the hybrid character of aerospace power. While Dr Coletta focused on the theoretical aspects and shared that air power theory was travelling a path that was distinct from space power theory and how the Russia-Ukraine war had introduced the new concept of ‘air denial’, Dr Abdullah focused on South Asia, particularly on Pakistan. She stressed that in order to keep pace with global technological trends, Pakistan would need to look beyond its traditional air strategy from the perspective of ground forces or air-land battle concept to air space concept; improve its space program; foster strategic relationship with the US and EU; and organise Pak-US joint workshops on non-kinetic warfare.

Discussing the role of aerospace power in South Asia’s security environment, Air Commodore Khalid Banuri opined that the world was in a flux politically; and was no more unipolar, nor yet multipolar with major powers still in conflict as well as cooperation. He agreed with his fellow speakers that air power now included the use of space for military purposes and regularisation attempts had largely become the arms controllers’ coffee club since nothing significant was coming out. While discussing, PAF’s clear space mission 2047, he remarked that significantly large milestones needed to be traversed. He also added that lack of balance in the approach of some major powers, particularly the US, was augmenting Indian arrogance and hostility leading to greater instability in South Asia.

In his presentation about the National Aerospace Science and Technology Park (NASTP), Air Commodore Dr Liaquat Ullah Iqbal shared that NASTP was an integral project of Aviation City Pakistan, being developed as Pakistan’s first Aerospace Cluster. With the complete support of the government and under the patronage of the Pakistan Air Force, NASTP had been envisioned to set up a state-of-the-art Special Technology Zone (STZ) housing high-tech aerospace technologies; design centres; public, private, national and international Aviation Industry; MRO facilities for commercial and military aircraft; aviation logistics; expo centres; and advanced vocational training institutes. Dr Iqbal underscored that NASTP would create a world class environment for augmenting the potential of excellence driven and innovative minds in the country.

Delivering his Vote of Thanks, President CASS, Air Marshal Farhat Hussain Khan shared key takeaways of the proceedings of the conference from each of the four sessions. He stressed that alliance politics seem to have accelerated US-China rivalry that may be heading towards a new Cold War. He emphasised that world powers should work together in a democratic way to ensure peaceful co-existence, respect for sovereignty of states, and shared rather than polarised world and the region. President CASS cautioned that US-India strategic agreements would result in downloading of critical  technologies (including dual-use) to India upsetting the regional balance of power in the political, strategic, and economic domains – an ideal recipe for destabilising South Asia.