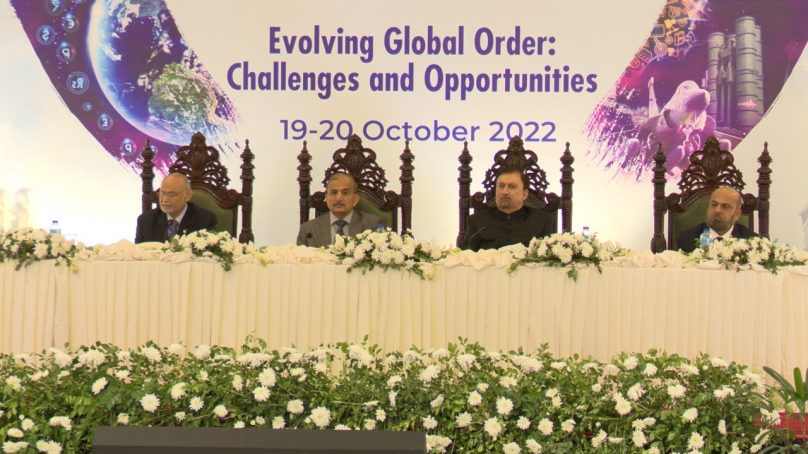 For collective peace, security and stability, the comity of nations must focus on working together in the diplomatic, geoeconomic, defence and technology domains.

This was the key message of eminent intellectuals at the sessions of Global Strategic Threat and Response Conference on ‘Evolving Global Order: Challenges and Opportunities’ organised by the Centre for Aerospace & Security Studies (CASS) in Islamabad.

Speakers of Working Session I on ‘International Security Environment: Emerging Challenges & Opportunities’ included Ambassador Robin L. Raphel, Senior Advisor, Center for Strategic and International Studies, USA; Dr Yan Xuetong, Dean, Institute of International Relations, Tsinghua University, China; and Ambassador Riaz Mohammad Khan, Former Foreign Secretary, Government of Pakistan. The session was moderated by Ambassador Jalil Abbas Jilani, Advisor Foreign Affairs at CASS. According to Ambassador Robin Raphel, strategic competition with China required a major allocation of diplomatic, strategic and economic resources; and stressed that the US Indo-Pacific Strategy would provide an opportunity for stable balance of power in the region. On the other hand, Dr Yan Xuetong argued that China-US competition was going to get worse in the next decade. He warned that deglobalisation in the future could create both traditional and non-traditional challenges for nations around the globe. He also highlighted that data technology had changed the concept of warfare in the world. ‘It is, unfortunately, being used in disinformation campaigns creating challenges for developed and developing nations’, he said. Discussing ‘US-China Rivalry: Options for Pakistan’, Ambassador Riaz Mohammad Khan agreed that China was focusing on its linkages in the Asia-Pacific in cooperative terms; and countries would have to adjust to different dimensions of US-China rivalry.

Dr Moeed W. Yusuf, Former National Security Advisor, Government of Pakistan was the Keynote Speaker for the second session ‘Geoeconomics: Driver of the Asian Century’, while other speakers included Dr Una Aleksandra Bērziņa-Čerenkova, Head China Studies Centre, Riga Stradins University, Latvia; Dr Karl J. Moore, Associate Professor, McGill University, Canada; and Dr Wang Wen, Executive Dean, Chongyang Institute for Financial Studies, China.  Dr Usman W. Chohan, Director, Economic Affairs and National Development, CASS, moderated the proceedings. In his Keynote Address, Dr Moeed W. Yusuf emphasised the need for Pakistan to keep economic security at the core of its security matrix, which he said required a focus on geoeconomics, without overlooking geostrategy. To that end, he said, Pakistan must aim to develop regional connectivity and seek development partnerships rather than aid partnerships. He cautioned that the world was moving towards ‘economic nationalism’ marked by increasing restrictions, sanctions and coercive measures. Countries, he argued would need to be highly competitive to be successful in such an environment. Speaking from Canada, Dr Karl Moore highlighted that while there were echoes of the past in modern-day globalisation,  the two were vastly different. However, China throughout ancient, medieval, and even modern times, had remained the only country that had always played a central role. In his view, the fragility of globalisation was leading to more focus on regionalisation. According to Dr Una Aleksandra Bērziņa-Čerenkova, geoeconomics was a welcome lens in a debate saturated with security discourse. She agreed that US-China competition had expanding and noted that China’s ambitions were just as strong as the US. ‘We have been under the impression that economic interdependence can deter. There is some truth to it. But when ambitions and strategies trump these arguments, it is not a deterrent’, she said. Dr Bērziņa-Čerenkova stressed that middle and small country agency among big rivalry was paramount for stability. Speaking on peaceful regional connectivity and prosperity, Dr Wang Wen from China stressed that 40 years of peace had delivered an era of prosperity in East Asia. This, he said, had been possible despite a diverse cultural, religious, and political environment. He emphasised on the continuity of policies and focus on integrated regional connectivity for prosperity in the Asia-Pacific region.

In Working Session III on ‘Emerging Technologies and Future Warfare’, Lieutenant General Khalid A. Kidwai, NI, HI (M) (Retd), Advisor National Command Authority & Former Director General, Strategic Plans Division, Government of Pakistan was the Keynote Speaker, while other distinguished speakers included Senior Colonel Yang Jun (Retd), Senior Research Fellow, China Institute for International Strategic Studies (CIISS), China; Dr George Malcom Moore, Scientist-in-Residence & Adjunct Professor, James Martin Center for Non-proliferation Studies, Middlebury Institute of International Studies, USA; and  Ms Marina Favaro, Senior Research Fellow, Institute for Peace Research & Security Policy, University of Hamburg, Germany. Air Marshal M. Ashfaque Arain, HI (M), SBt (Retd), Advisor Chief of the Air Staff on CASS Affairs and Director Emerging Technologies, CASS, moderated the proceedings. In his Keynote Address, Lt General, Kidwai (Retd) emphasised the fact that emergence of new technologies was not a new phenomenon but a constant historical fact which was likely to continue in the future as well. A spectacular technology, when inducted in a weapon system, tends to affect stability for a while but soon a counter technology or antidote is developed which acts to restore the stability. In the context of South Asia, Lt. General Kidwai said that the West in its bid to strengthen India as a counterweight to China has been violating international rules and norms by arming and selectively sharing technologies with it which has put strategic stability in the region under stress. India, on the other hand, he said, has always been careful to follow its interests rather than completely playing to one side. Lt. General Kidwai at the end reiterated that Pakistan like always would respond to restore stability in the region. Senior Colonel Yang Jun from China discussed how future warfare could only be won by grasping the laws and characteristics of modern warfare, jumping out of the box of traditional thinking and stereotypes and taking into consideration systems, data and algorithms, exploring new operation concepts, designing new approaches to victory, strengthening the integration of warfighting & technological development and that of research and operations, and drawing on others’ strengths to make up for one’s own shortcomings. In his presentation, Dr George Moore from the US discussed how the current and future proliferation of drones and Lethal Autonomous Weapon Systems had changed both military and civil security, including the impact of AI and removal of the human element from lethal decision-making. He opined that the potential use of drones, particularly Uncrewed Aerial Vehicles would lower the threshold for conflict given the ongoing issues raised by UAV operations in Ukraine. ‘There are no conventions or agreements governing use of drones. This area could gain prominence after the Ukraine war,’ he concluded. Ms Marina Favaro from Germany defined emerging technologies as those scientific discoveries and technological applications that had not yet reached maturity or were not widely in use, but were anticipated to have major – perhaps disruptive – effect on international peace and security. She cautioned that great power competition would be the main driver behind future research and development in the US, Russia, and China. ‘A possible China-Russia alliance could confront the US with serious military-technological challenges’, she concluded.