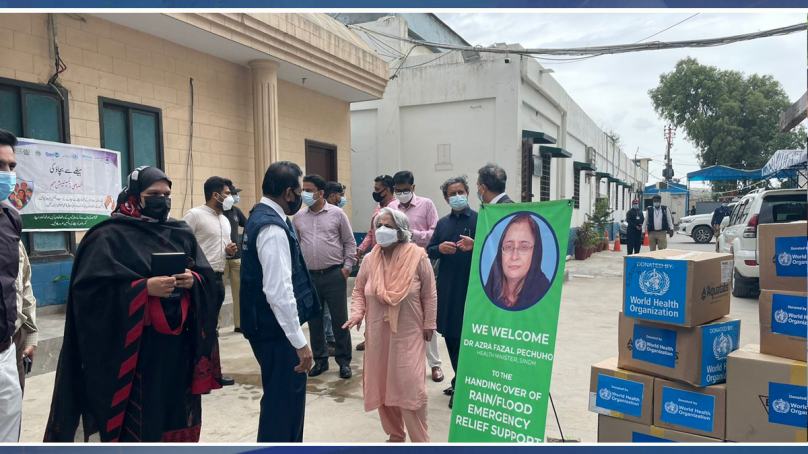 WHO Handover of Medication

Karachi (01-09-22): Minister for Health and Population Welfare met with World Health Organisation Representative to Pakistan Dr. Palitha Mahipala to discuss the ongoing flood relief in Sindh and the ways in which WHO could support the Sindh Health Department. Also in attendance at the meeting were Secretary Health, Mr Zulfiqar Shah and Parliamentary Secretary Health, Mr. Qasim Siraj Soomro and WHO Representative, Dr. Sara Salman.Dr. Mahipala said that a disaster of this scale has not been seen before in this country and that WHO would support Pakistan in this hour of need in all the ways possible.WHO gave 300,000 aquatabs and 300,000 facemasks along with 600 bottles of 500ml of hand sanitiser. They also provided the way of Antibiotics and Anti Microbes; 22,804 capsules of Amoxicillin, 30 bottles of Chlorhexidine Gluconate tablets, 5000 Metronidazole tablets, 91,600 Sulfamethoxazole plus Trimethoprim tablets, 1800 bottles of Amoxicillin Syrup, 6000 bottles of Ciprofloxacin Syrup, 1680 bottles of Metronidazole Syrup. For Anti Pyretics there are 54,810 tablets of Acetylsalicylic Acid, 3000 Ibuprofen tablets, 600 bottles of Ibuprofen, and 240 injections of Diclofenac Sodium. There are also 6000 tablets of Chloroquine Phosphate for anti-malaria and 30,000 tablets of Mebendazole for anti-parasitic, 60,000 tablets of Chorpheniramine and 900 bottles of Chlorpheniramine syrup for antihistamines. Skin Diseases are also in significant numbers now so 300 tubes of Clotrimazole Cream and 2400 tubes of Polymyxin B Sulphate Bacitracin Zinc Skin Ointment. IV Fluids and ORS were also provided in 1360 bags of 500 ml of Dextrose -5% and 140 bags of 100 ml of Dextrose 5%, along with 12,000 sachets of ORS. Other medicines include 1260 capsules of Omeprazole, 870 tablets of Salbutamol, and 300 ampules of Salbutamol. The Minister for Health and Population Welfare, Sindh, Dr Azra Pechuho spoke with WHO Representative to Pakistan Dr. Palitha Mahipala exchanged insights regarding the needs of the people for flood relief. It was decided that mobile health units are the most needed as they can access populations that may have been cut off due to flood water.Dr. Mahipala said that he could have 10 double cabin cars that are all terrain and 10 regular vans that can access relatively motorable roads and have them be utilised as mobile health units.Dr. Azra Pechuho stated that there will be a rise in chronic diseases like TB, Hepatitis B and C, HIV and Typhoid due to the contaminated environment. She was also concerned about the needs of pregnant women across the province and how they can be catered to. Dr. Pechuho advised that a radio transmission be carried out regularly that advises all pregnant women and those with them to seek out temporary and fixed health facilities if they are able to or alert health officials as to their locations so they can be looked after. Registration of pregnant women will be helpful in allowing the flood relief workers to know to prioritise specific treatments and supplements for the women who need them most. Dr Azra Pechuho asked Dr. Mahipala that in their flood relief support to Sindh, pregnancy kits with towels, diapers, nutrition supplements etc there should also be menstrual hygiene support.Dr. Mahipala agreed and added that the workers at WHO will pack these kits up themselves and support the Sindh province in this regard. Dr. Azra Pechuho added that the doctors and paramedics that were previously handling covid will be asked to help with flood relief. Labour colonies across the province are being used to house the Internally Displaced Population (IDPs) as those from flood-affected areas are migrating to drier regions. Since many IDPs are travelling to Karachi, Dr. Azra Pechuho advised that tertiary hospitals in the city have a separate counter for IDPs.It was also decided that there will be a daily online meeting with all the ministers who are taking account of the flood relief in Sindh in order to ascertain what the needs are and how the disease patterns are changing and what the priorities are for flood relief on a day to day basis. There are currently 43,85722 internally displaced people in Sindh and 46,8897 patients have been treated in the mobile and fixed camps around the province with over 62,000 patients treated daily for cases of malaria, dengue, diarrhoea, gastro and more. Dr. Azra Pechuho also advised to create makeshift hospitals with labour rooms and operation theatres in the tent cities that are being made to provide shelter to the IDPs.