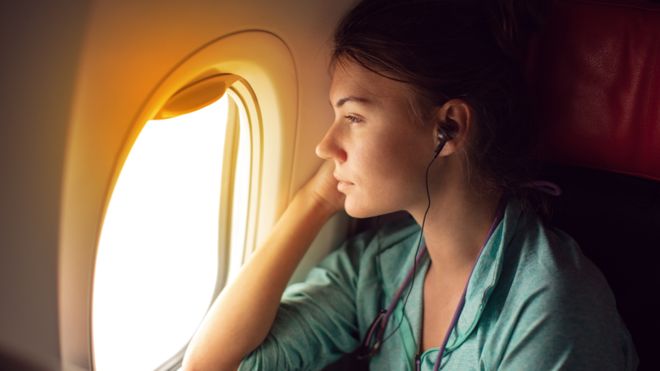 One of the biggest problems of aviation is that it does not emit only CO2, but other greenhouse gases.

Every time you get on a plane, you are contributing to the emission of greenhouse gases and the aggravation of climate change.

The best thing, according to BBC environment reporter Laura Foster, is not to fly directly and choose alternative means of transport.

When traveling by train, for example, a passenger emits 14 grams of carbon dioxide (CO2) per km, compared to the 285 issued if traveling by air.

The calculations, made by the European Environment Agency (EEA), are for a train of about 150 passengers and an aircraft of 88.

For larger aircraft, the figure can reach more than 170, according to a report from the London School of Economics (LSE).

But one of the biggest problems of aviation is that it not only emits CO2.

And those emissions occur at high altitude in the atmosphere, where the impact is greater due to a series of chemical reactions.

The Intergovernmental Panel on Climate Change (IPCC) estimates that the impact of aviation on climate change is two to four times higher than the effect simply of its CO2 emissions.

But if you decide to fly, there are factors that you can take into account to reduce your carbon footprint.

Each object loaded on an airplane makes it heavier. And the heavier the plane, the more fuel it needs.

Image caption Swedish activist Greta Thunberg insisted on traveling by train during her recent tour in Europe to reduce her carbon footprint.

So when you pack, think about whether you can leave some clothes or accessories at home.

You can also consider if it is possible to pay more to offset some of your emissions. The extra money is used in projects that absorb emissions from the atmosphere such as planting trees.

However, a study by the BBC found that less than half of the 28 main airlines consulted offer this possibility to their clients .

And even when airlines offer the option to pay more to reduce the carbon footprint, less than 1% of passengers choose to do so.

Airplanes use most of their fuel when they take off and when they land.

Image caption Reducing your scales will help reduce the ecological impact of takeoffs and landings.

If you can fly nonstop to your destination, your carbon footprint will be smaller.

A Boeing 747 aircraft uses approximately four liters of fuel per second. During a flight of 10 hours the aircraft can consume about 150,000 liters.

A 2013 World Bank study by analysts Heinrich Bofinger and Jon Strand shows that if you fly in business class or first class , your greenhouse gas emissions are at least three times higher than those you would emit if you traveled in economy class. 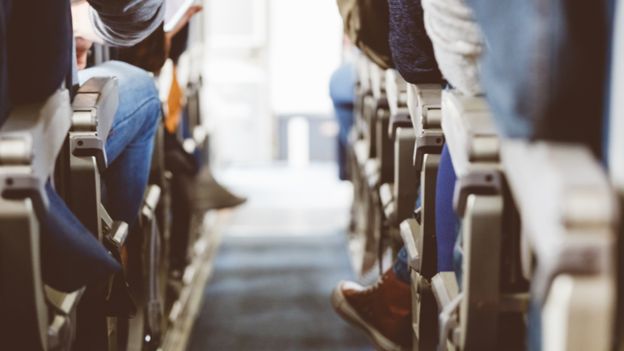 Image caption Traveling in the first class emits three times more CO2 than doing it in the economy class, according to a World Bank study.

In the economic section there are more seats, so more passengers can be transported with the same fuel.

The study indicates that the space occupied by a first-class seat can be up to about four times that of an economic seat.

Some airlines produce more emissions than others.

A study of the LSE published in March compared the CO2 emissions of different airlines and found important differences .

EasyJet, for example, emits 75 grams of CO2 per km per passenger, compared to 172 for Korean Air.

EasyJet to lower emissions in 2020

Emissions measured in grams of CO2 per passenger per km

However, some critics point out that while low-cost airlines such as EasyJet can produce fewer emissions, by offering cheap tickets they are encouraging more people to opt for air travel.

Aviation contributes globally to close to 2% of CO2 emissions , but the impact of this sector will grow between 200% and 360% due to cheap tickets, according to estimates quoted by the Carbon Brief site.

5) Use your local airport

If you travel by car to an airport, you will emit more greenhouse gases by burning more fossil fuels than if you travel to the airport by train or use a nearby terminal.

Traveling in a car of 4 people emits 42 grams of CO2 per passenger per km, according to the EEA. The figures vary considerably depending on the energy efficiency of the vehicle.

Electric cars emit less CO2 , but it is important to determine the generation source of the electricity used to charge the vehicle’s battery.

In Norway, for example, the largest source of electricity is hydroelectric, while in the UK it is the burning of fossil fuels and some renewable sources.

In countries such as India, the emissions of an electric car can be four times larger than in other countries because the source of electricity is mostly the network of coal-burning power plants.

5 reasons why drinking coffee is actually good for you