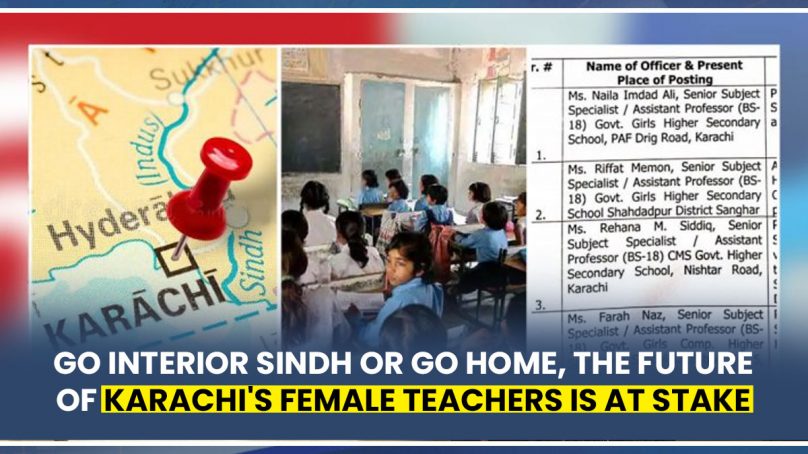 Go Interior Sindh or go home, the future of Karachi’s female teachers is at stake

“I have been in the field of education for 25 years. I had a dream that when I retire, I would be in grade nineteen but when I received my promotion letter came from our Education Department, there was shocking news that instead of Karachi, I was posted to a remote area in Sindh. And, it didn’t happen to me only, but to 38 more women. That is, there are a total of 39 female teachers of Karachi who have been posted to remote areas of interior Sindh instead of Karachi. Tell us how to leave home and go to remote areas alone?”

One of the female teachers revealed this to Rava News, upon maintaining anonymity.

According to details, 28 male and 39 female teachers of Karachi Region, who have been promoted to Grade 19 (Principal / Associate Professor) of the recent Subject Specialist Cadre, are being transferred to remote areas of Sindh by the Sindh Education Department.

According to sources, the promotion letter was issued on September 15 while the posting orders were issued on October 4.

Among those promoted in Grade 19 (Principal / Associate Professor) of Subject Specialist Cadre 52 women belong to Karachi. But surprisingly, only 12 got postings in Karachi while the rest of the women were given postings in Sindh

While under the Wedlock Policy, all institutions are obliged to post husband and wife in the same city. Remember, under the Wedlock Policy, the policy of employing husband and wife in one place was adopted during the (N) League’s era. Wedlock policy is adopted where there is room for it, most of the time when there is room, such employees are sent on deputation. In 1998, former Prime Minister Nawaz Sharif’s government made this policy, under which women are accommodated if there is a capacity for it.

While Article 25/3 of Pakistan’s law protects the protection of the rights of women and children.

Upon expressing concerns over interior Sindh transfers, female teachers are being strongly advised by senior officers to under these situations or take retirement.

Rava News tried to contact Secretary Education Sindh Akbar Leghari in this regard but despite repeated efforts, he could not be contacted. On the other hand, the spokesperson of Education Minister Sindh, Saeed Memon advised to talk to Secretary Sindh in this regard and he refused to give any statement on it.

In this regard, the affected female teachers, on condition of anonymity, revealed that

We had first applied to the Secretary of Education on 6th October regarding our concerns on interior Sindh postings. While in a direct meeting with them, a delegation of affected female teachers requested them on humanitarian grounds to give postings to the affected women in Karachi. In this regard, the Education Secretary promised a review and said that the affected women should send their joining mail.

Secretary Education Sindh contacted the President of the Subject Specialist Union and once again requested him to convert this posting of women into Karachi after which the Secretary of Education met the affected women and heard their problems and placed three options before them.

Option number one: women will go and join and transfer later.

Option number two: If they don’t want to join, then they can forgo (Forgo means Return Your Promotion) One disadvantage is that after For Go, these teachers will not be eligible for promotion

Option Number Three Wait for Karachi Posting and continue to work on Grade 18 As seats are vacant Posting can take six to eight months.

Otherwise, it is expected that if six officers are promoted from Karachi in 19th grade to 20th grade, six seats will be vacant. Two principals will retire for three months. In addition, twenty-three schools are being upgraded. If SNE comes, the posting will take place. All this will be done by the next Budget 2022.

On the question of female teachers as to how they could remain in their old posts if they did not join, the secretary talked about giving verbal instruction but apologized for not giving anything in writing. While the posting cadre duration has been extended to six to eight months. On the deputation of women, he said that the court has banned it. There was a demand to increase SNE in 33 higher secondary schools in Karachi, in response to which he said that it will be seen in the next budget.

According to sources, under the conspiracy, 18th and 19th-grade SNEs out of 33 higher secondary schools in Karachi have been shifted to Sindh in the last two years.

Abdul Rahman Khan, General Secretary, Save Education Action Committee has strongly condemned the exchange of a large number of male and female teachers from the Karachi region and said that a registered union of subject specialist cadre has equated the abuse of Karachi teachers and students. He further said that while taking this oppressive and cruel decision by the education department, the protection and sanctity of women teachers, in particular, was not taken into consideration as to how they would be able to perform their duties alone in remote areas. How will they be able to satisfy themselves in a strange environment? And how will they be able to perform their educational duties while avoiding harassment and coping with the situation?

While the move is also being condemned by political parties, the Sindh government is being questioned by MQM and Jamaat-e-Islami as to why the urban women of Karachi are left stranded.

According to sources, the move is aimed at forcing Karachi teachers to cut the dust so that they leave their jobs and do business afresh in these seats.

Women teachers say they will not forgo their promotion because it is their right. For 25 years, they have been in the field of education, whereas if they don’t give timely joining, the salary will not be released, which is their economic murder.

We demand that women be posted in their hometown Karachi. According to the 1998 court ruling, every woman will be posted in her husband’s place of residence, so it is their legal right to live in Karachi.

However, despite repeated contact, Secretary Education Sindh Akbar Leghari Sahib has not responded.

The education department’s decision will not only deprive thousands of Karachi students of senior teachers but also term the move as a conspiracy against Karachi’s educational institutions.

The tragedies of the city of Karachi are no less anyway, while the deprivation of the rights of women senior teachers is not a commendable step, it would be better to stop these forced transfers so that no major immoral tragedy arises.

Education: The Worst Victim of the Pandemic