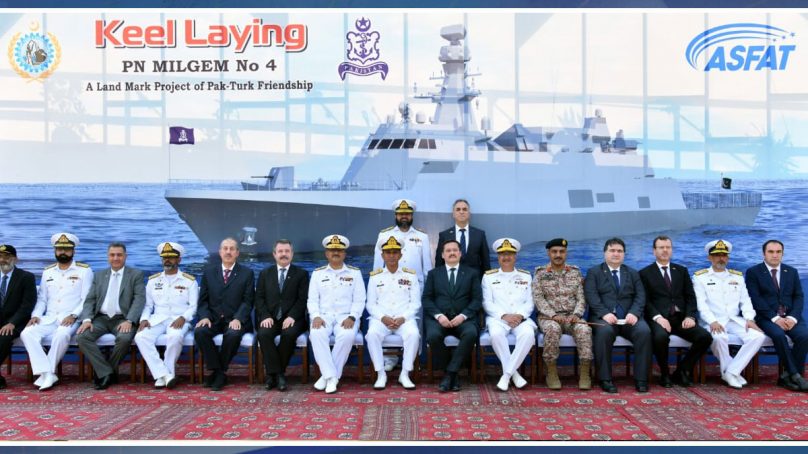 While addressing the ceremony, the honourable Chief Guest expressed that it is a matter of pride to witness the Keel laying of MILGEM Corvette in Karachi Shipyard being constructed in collaboration with M/s ASFAT of Turkey. The Admiral highlighted that it is a historic occasion as the Ministry of Defence Production, Pakistan Navy, Karachi Shipyard and M/s ASFAT of Turkey have joined hands for the construction of two Corvettes in Pakistan while another two are under construction in Turkey. Naval Chief appreciated the performance of KS&EW and mentioned that indigenization is at the forefront of our policy and it is convincing to see the state of the art warship being built in Pakistan.

The construction of corvettes in Pakistan is aimed to provide impetus to the local shipbuilding industry and to further enhance KS&EW capabilities. These ships are being constructed as per modern naval ship class standards and will be equipped with state of the art weapons & sensors including surface to surface, the surface to air missiles and anti-submarine weapons. The addition of these ships would significantly add to the lethality and operational capability of the Pakistan Navy.

Earlier, the MD KS&EW Rear Admiral Ather Saleem presented the performance of KS&EW and highlighted that the shipyard is fully cognizant and aligned with the goals set forth by Government and Pakistan Navy for self-reliance in Defence Shipbuilding Industry. He emphasized that deep-rooted friendship with brotherly country Turkey for this mega project will open new vistas of further cooperation in the field of indigenous warship construction and other defence sectors in Pakistan. MD KS&EW also highlighted current production activities of KS&EW that include constructions for both inland and abroad projects.

The ceremony was attended by representatives of M/s ASFAT and other high-ranking officials from GoP, Pakistan Navy, KS&EW and the business community.