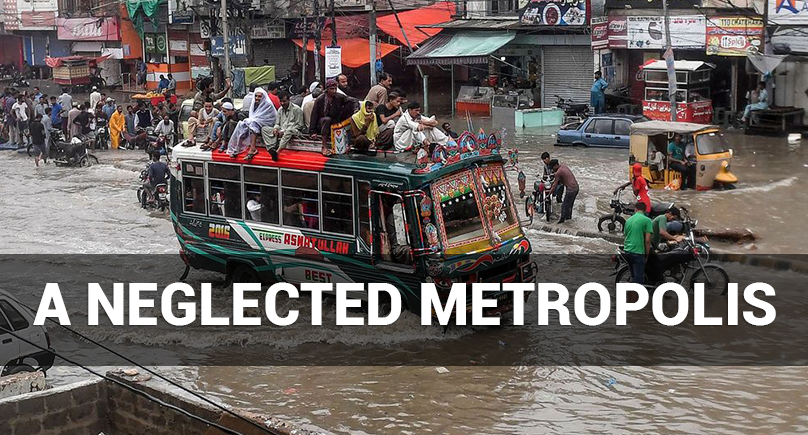 THE ill-treatment meted out to Karachi over several decades was evident on one appalling, devastating day. On Thursday, Pakistan’s financial juggernaut was battered by an unprecedented rainfall, which claimed 19 lives and exposed the city’s already crumbling infrastructure. Many died of electrocution, some drowned in the waist-deep rainwater. Millions across the city, even in the high-end DHA area, saw their homes and businesses inundated. There was no power; even mobile phone services were suspended. Karachi was, literally and figuratively, left to its own devices, and there was no government, no state machinery in sight.

No doubt, this has been a record monsoon in Karachi: at around 485mm, the rainfall in August this year has broken a 90-year record. It is, nevertheless, equally true that the city sank under the weight of the criminal neglect and endless greed that have characterized the city’s governance for a number of years now. Everyone, from the ruling elite to various other influential stakeholders, are blameworthy for Karachi’s dive into one of the world’s most unlivable cities. Wasim Akhtar, the city’s mayor whose tenure ended on Wednesday, was from the MQM, and the PTI in 2018 emerged as the largest party in Karachi. But sadly, neither the mayor nor the PTI with its pompous, lofty promises, could do anything for the forsaken metropolis. Meanwhile, the PPP’s top brass has been making billions through their stakes in multistory construction projects across the metropolis, thoughtlessly straining its already decaying infrastructure.

The MQM is not behind when it comes to Karachi’s destruction. While the party ran an effective local government in Karachi, many in the party’s leadership only put their own interest above everything else. The party introduced the unique practice of ‘china-cutting’ whereby plots were carved off from public parks and other places and sold for enormous profits. No attention was given to urban planning, improving the drainage system or developing a workable solid waste removal system. Instead, natural storm-water nallahs have either been used to dump solid waste, or were encroached upon, often with the complicity of those in power. In their lewd pursuit for self-aggrandizement, the political parties and other players in the highest ranks of authority have treated the metropolis as their personal property, rather than a city destined to be the gateway to a thriving, prosperous Pakistan.

Everyone responsible for this sorry state of affairs must bow their heads in shame, and are liable to be prosecuted.

5 Things Found in Every Woman’s Handbag