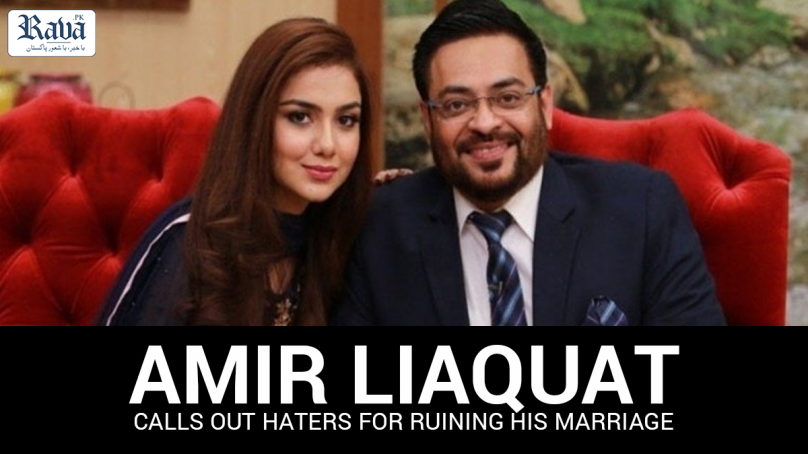 Amir Liaquat Calls Out Haters for Ruining His Marriage

We all know Amir Liaquat for multiple reasons, for his hosting, for reciting naats beautifully, and at times for outrageous behavior in his Ramadan transmissions. Has been a laughing stock on multiple occasions and this is how stays in the limelight too.

Every time Amir Liaquat pulls an act on his shows, it breaks the internet with various memes. Internet trolling has become a part of his name now.

Just like that, his personal life has been a talk of the town too. He received severe backlash when he married for the second time to Tuba, who was twice younger than his age. People criticized the couple and even his own daughter called Tuba “a homewrecker”. Ultimately, he divorced his first wife and abandoned his kids. However, the couple paid no attention and seemed very much in love with their adorable posts. Amidst, all the hatred, we would see them posting affectionate posts and comments for each other.

Their love story drastically took a bad turn when a woman named Hania Khan claimed to be Amir’s third wife. Amir strictly denied that and said it was a lie. However, Hania came up with proofs of his voice notes and screenshots of her conversation with him but he kept on denying that. This created a lot of tension between him and Tuba and they stopped appearing together on shows.

Recently, Amir Liaquat shared a video on his Instagram where he told how haters ruined his marriage with Tuba and said, “I have faced so many accusations and allegations with patience and it broke my family.”

He claimed that people only made a controversy out of this issue and no journalist asked Hania to show the marriage certificate. He said that 16 cases are reported and she will be called in the court. He left the matter to Supreme Court.

Amir Liaquat strictly warned hater to stop spreading false news or they will also be summoned to the court.