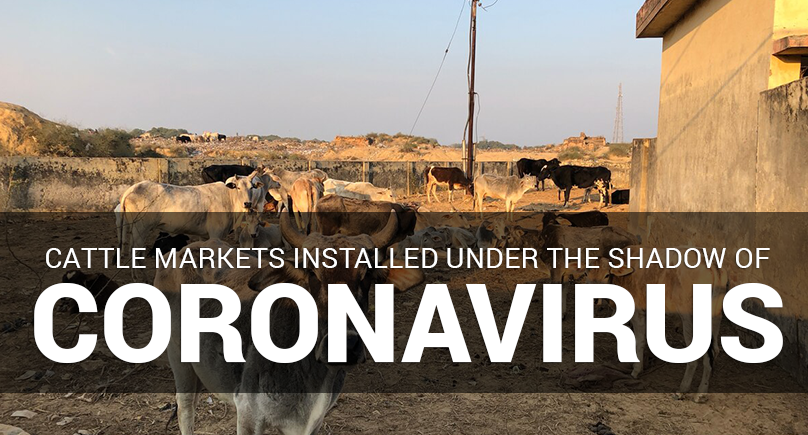 In addition to being a key religious festival and cultural event, which people of all ages—from children to young boys to the elderly—tend to enjoy a lot. Going to the cattle market and choosing the best animal on their budget is Pakistanis’ favorite pastime in the run up to the festival. And the entertainment gets to a whole new level when young boys and adults take the animals from street to street, flaunting their beauty and looks to draw people’s attention and applause.

This year, however, due to the coronavirus pandemic, the religious festival has turned into a damp squib. But in major cities of the country, despite the threat of the pandemic, cattle markets are being set up, and the pre-Eid festivities appear to be in full swing. While the relevant authorities are giving reassurances of the SOPs with regard to the occasion, but the violations of health and safety protocols in those markets cannot be ignored.

Here is a look at the current situation in the cattle markets set up in Pakistan’s major cities.

Karachi’s Super Highway’s cattle market is considered to be Pakistan’s largest, where as many as 0.6 million animals are brought from all over the country. Karachi’s Malir cattle market is also highly popular among the customers, and, compared to the past, this year the market is seeing a greater number of visitors. However, they all seem concerned about the state of cleanliness and hygiene in these markets, which lead to the spread of the coronavirus cases. Yawar Chawla, spokesperson of the Super Highway’s cattle market, said that after getting tender, different arrangements are being done for setting up the market, which will be better than last year.

Mr Chawla went on to say that, given the ongoing situation, children and the elderly are being discouraged to enter the market, while the entry of those coming with packed vehicles is also prohibited. He said that he fully endorses the provincial government’s initiative to place the ban on setting up cattle markets in the streets and thoroughfares of the city, as this will hasten the spread of the coronavirus.

The authorities have also reassured that, due to the coronavirus outbreak, the cattle festival will not be held this year. They also said that, although a VIP sector will be set up in the cattle market, activities such as animal catwalk that could lead to unwarranted gathering of the spectators, will be strictly disallowed.

In other parts of the country, livestock markets are set up relatively later than that of Karachi’s.

In Islamabad, one large and four small markets are held on the eve of the festival. Overseen by the municipal corporation, the large cattle market is set up in the capital’s I-11 sector, while other markets, which are managed by other union councils, are established in Taramri, Bhara Kahu, Saidpur, and Tarnol.

On account of the Covid-19 situation, stern protocols have been instituted in the capital’s cattle markets. Those brining animals to the markets will be instructed to place hand sanitizers at their stalls and ensure social distancing. The owners of the stalls that violate these rules will be fined, and in case of frequent violations, such stalls will be revoked.

In Lahore, on the eve of Eid-ul-Azha, as many as six cattle markets are set up, but this year, due to the Covid-19 situation, the number of markets is increased to 13, which have been functional since 15th July. So far, 9 livestock markets have been installed around the city, where, in sharp contrast to the government’s claims, there is a pathetic situation of cleanliness and hygiene, while the coronavirus SOPs are also being flouted.

In Peshawar, too, cattle markets have been installed in the run up to Eid-ul-Azha. In the city’s largest cattle market, the coronavirus SOPs are being flagrantly violated, while heap of trash and filth across the market speaks volumes of the authorities’ shambolic performance.

In Quetta, the largest livestock market has been set up in the city’s eastern bypass area, while a camp regarding the coronavirus SOPs had also been installed. According to the spokesperson of Quetta Municipal Corporation, when the 30 traders whose temperatures were recorded high at the market’s main gate were asked to test for the coronavirus along with their companions, they got worked up and allegedly resorted to hooliganism, which led to the temporary closure of the market.

Now that the cattle markets have been installed across the length and breadth of the country, it remains to be seen as to what extent the citizens and the relevant administrations carry out their responsibilities. It should be kept in mind that the only solution to the coronavirus is prevention, which is regrettably being flouted by all and sundry at the moment.

COVID-19: A Bane for Pakistani Prisoners