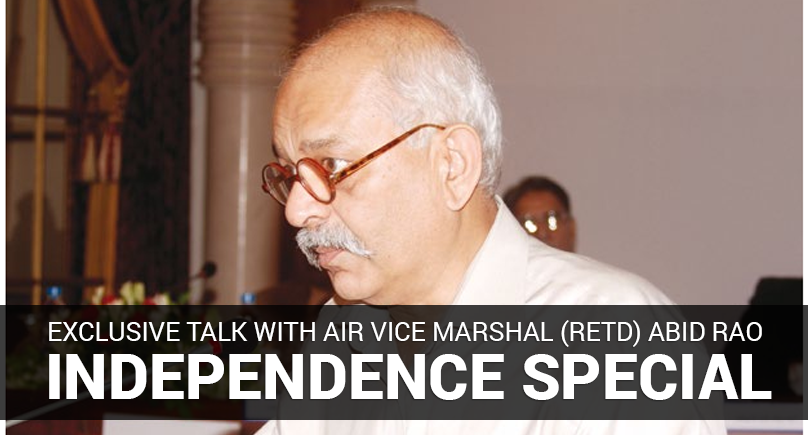 R: What is independence?
AVM: If you want to know the meaning of independence, go ask the people of Palestine, Kashmir, or Afghanistan whose more than 0.4 million refugees live in Pakistan. We don’t really give value to independence as much as we should, because we got it on the platter.

R: Your views on the journey of our defence institutions for this independence?
AVM: Look, Pakistan’sAir Force is one of the national institutions that have worked very hard and rendered immense sacrifice to retain independence.   PAF underwent several highs and lows during this journey. “We had the toughest fifteen years when we suffered sanctions following the 1965 war; but even then, we had the jets from various countries, and it was during this time that we faced the worst war of 1971. However, our air force benefited immensely when, in the Afghan war, the US returned to us, which can be gauged by the fact that despite downing more than 10 Russian fighter jets, we did not suffer any harm. Nonetheless, in the 90s, when we were slapped with more sanctions, we had learned to be independent and upgraded our F-16 and Mirage jets after 9/11.”

R: What would you say about Pakistan’s defence capabilities?
AVM: We have experienced many phases when our defence capabilities were put to the test. Barring the 1971 war, we have always responded fittingly to our enemy, which our nemesis is well aware of. After the partition, India had usurped Pakistan’s more than 500 million rupees, while it also did not give Pakistan’s due defence budget because it always wanted to establish its hegemony in the region. Therefore, in light of the Quaid’s vision, Pakistan adopted an aggressive approach against India right from the outset, by strengthening its flying capability and training its pilots as professionally as possible. “We train our pilots on one key principle: our every war is the battle for survival and we are obligated to ensure the sanctity and respect of our mothers and sisters. No wonder, each pilot of the PAF is the best

R: What do you think about the hugely popular Indian Rafale planes whereas we also have world-renowned JF-17 Thunder jets?
AVM: It is not fair to draw the aircraft-to-aircraft comparison between Rafale and JF-17 Thunder. A jet never fights alone; it’s accompanied by support systems. This will still be some time before the Rafale becomes operational; technicians, pilots will undergo training, what’s important is that how that aircraft is used when needed

They also have a Su-30 plane, which is also good, but, by the grace of the Almighty, we downed it on 27th February. Fortunately, our systems are very efficient, and our training setup has been exceptional. Our well-trained and skilled pilots always fight for our survival and we are fully prepared for the next war. In fact, it’s not easy to break our defence system. The way our defence fought terrorists over the last few years, through various countrywide operations, it’s clear that there’s no enemy that is invincible. Operation Radd-ul-Fasad is a great example of our army’s unprecedented valour and commitment. Rafale is not an issue for us at all. The Indian air force has never been much worse off than now.

We have been trained for 40 long years in flying skills; if our neighbours fly a plane once in a day, we do it three times, as even one minute of dereliction can raise questions over our capability to defend our country. That’s why, being the sentinels of our skies, we remain alert 24 hours a day.”

R: How do you view the future of Pakistan’s defence system?
AVM: If you have to retain your independence, then you will to strengthen your defence system. And by the grace of the Almighty, we are successful in that. We have worked on technology and our land and sea defence systems are self-reliant and independent.

Why Pakistan Has a Rich Cultural Heritage